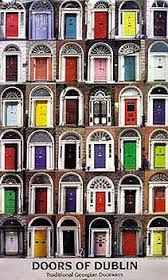 By Mackenzie Carpenter / Pittsburgh Post-Gazette
What does your front door say about you?
Creative? Elegant? Exuberant? Colorful?
Or boring?
Now that temperatures are finally warming up, it's time to paint away the gloomy winter. Why not use your exterior entry to say something about your interior? Dispense with same-old, same-old brown, black, gray or dingy white and cover your doors in gleaming cherry red, "Dr. Who" blue, grass green, daffodil yellow and every color in between.
So how about it, Pittsburgh? Dubliners have done it for centuries. Our weather is just as gloomy as Ireland's and we all could use a lift.
When I recently moved into a 1906 half-duplex -- charming and full of light on the inside, gloomy mustard brown brick on the outside -- I remembered the doors I'd seen in Ireland. There's actually a poster, "The Doors of Dublin," a vivid collage of that city's crayon-box-colored doors that first appeared in 1970, around St. Patrick's Day, in the window of the Irish tourism offices on Fifth Avenue in New York City. It became a potent tourism marketing tool. Demand for copies of the poster was immediate, and it's still on sale today, while Dublin's doors play a starring role in tours of the city.
While I don't live in an 18th-century Georgian mansion on Merrion Square, I realized I could do something more cheerful with my front door than what was already there -- an iron gray that perfectly matched the December sky above. So I went to Home Depot, looked around, and saw THE color: "Retro Avocado." Over the course of two weekends, I painted my own front door.
I am not sure what all my neighbors think, but I received compliments from two of them, including the nice woman who lives directly across the street and has to look at my door every day.

But for those with doors already painted some subdued color, couldn't we please get a little more adventurous?
"In Europe, in general, they have a lot more courage than we do in the States," said John Lahey, president of Fine Paints of Europe, which makes high-quality Dutch paint, known for its depth and high gloss. It also sells a special kit just for painting doors.
He has noticed an uptick in demand here for colorful doors "because people go over to Europe and see what's been done and want the same for their homes."
Researchers at PPG Pittsburgh Paints did a study on the colors used for exteriors of houses in Holland between 1600 and 1900, said Dee Rice Schlotter, PPG's national color brand manager. Much to their surprise, they discovered that colors in the old days were much brighter than they are now, and varied according to the type of house, from provincial farmhouse to stately Amsterdam canal house. Those historical Dutch colors, she said, were known as ultramarine blue, or Ultramarijn; canal green, or grachtengroen; Bentheimer yellow, or Bentheimergeel; Zaans green or Zaansgroen; and ox blood red or Ossebloedrood.
The old, brighter paint formulas were made of resin, egg yolk, water, pigment, linseed oil and turpentine. Today, they're synthetic -- acrylic resins -- and not as vivid, she said.
According to PPG's data, the most popular colors for doors in the United States are "Wet Coral," a red/orange; "Phantom Mist," a dark gray; "Purple Basil," an eggplant; "Cavalry," a dark blue; and "Lichen," a fresh spring green. PPG has more than 60 independent dealers throughout Western Pennsylvania, and they make Olympic Paints, which are sold at Lowe's.
The move to green and red/orange, a shift from the traditional, patriotic red, "gives you more of a modern look," Ms. Schlotter said. "People should absolutely paint their front doors a different but coordinating color than their shutters. It's the perfect way to welcome friends and create a true center of interest for your home."

. In Pittsburgh, some colors work better than others; some soft pastels that pop in tropical climates can look dingy in our northern light.