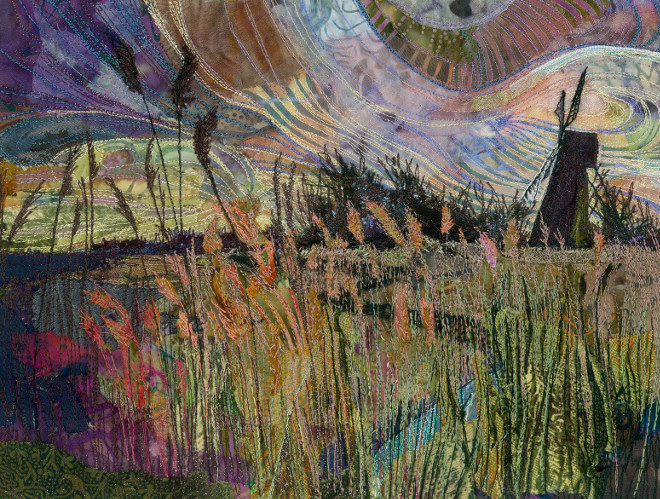 Reeds All About It by Rachel
Textile artist Rachel Wright from the UK recreates the world with a rich palette of threads, building up scenes that shine with beauty. She grew up surrounded by her father’s paintings, etchings and engravings. She felt that entering that world was a natural step, even if she did choose an entirely different medium as her paintbox.
“By the time I was in sixth form I was already looking for a university course in textile design,” she says.
Rachel was determined to bring her drawing skills together with her textile work, despite the fact that the college she attended really didn’t regard being able to draw an asset – “in fact, I’d go as far as to say they almost tried to beat it out of you!” (Unfortunately, this attitude about drawing prevails in many art schools-BBL)
Happily, since leaving college, she’s had the chance to explore the possibilities offered by melding her talent for portraying the natural world with her fabric prowess. “They lend themselves to the fluid restless motion that I try to portray in my skies and seas.” 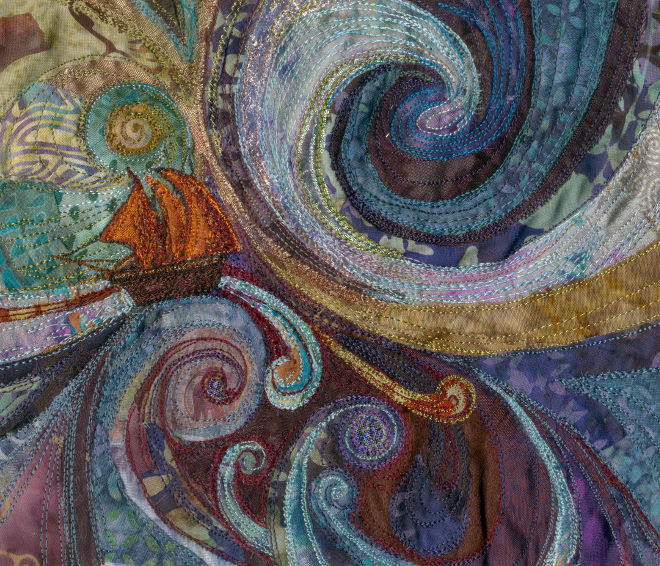 Any Port in a Storm by Rachel Wright
The vivid swirling shapes captured in her work conjure up a sense of energy and movement reminiscent of Van Gogh’s Starry Night. In Any Port in a Storm, above, there’s a palpable sense of peril and the drama of being at the mercy of a wild sea. To create a piece like this, Rachel selects the fabrics with care, and then machine sews them into the shapes that reflect the image in her mind. Floating City Detail 02 by Rachel Wright
“My first love was hand stitching but it was taking me far too long to complete each piece and once out in the real world I needed to start earning some money from my work,” she says. “My grandma had bought me my first sewing machine – it’s 30 years old now and still the one I still use everyday!”
Selling her work offers an emotional benefit too. “It’s such an enormous pleasure to know that people are prepared to part with their hard earned cash, to own something that I have made,” she says. “I love walking into and exhibition and seeing those little red dots on my work. It’s the best feeling!”

Hooray and Up She Rises by Rachel Wright
Her earliest pieces were beautifully abstract embroidery works, which provided her with the training to create the vivid landscapes and seascapes she’s now known for.
“I learnt a lot about using colour and composition, all of which stood me in good stead for the landscape pieces – using using fabrics, with all their wonderful colours, textures and patterns as my palette and threads as my paintbrush, adding in the details.”
Starting a brand new picture is the hardest thing, she admits. “I call it ‘Blank canvas syndrome’. Sometimes even the housework can suddenly seem like an attractive proposition when I should be starting a new piece. I really don’t like the beginning but inevitably, once I dive in and get going it’s usually only a matter of an hour or so before I’m hooked again.” 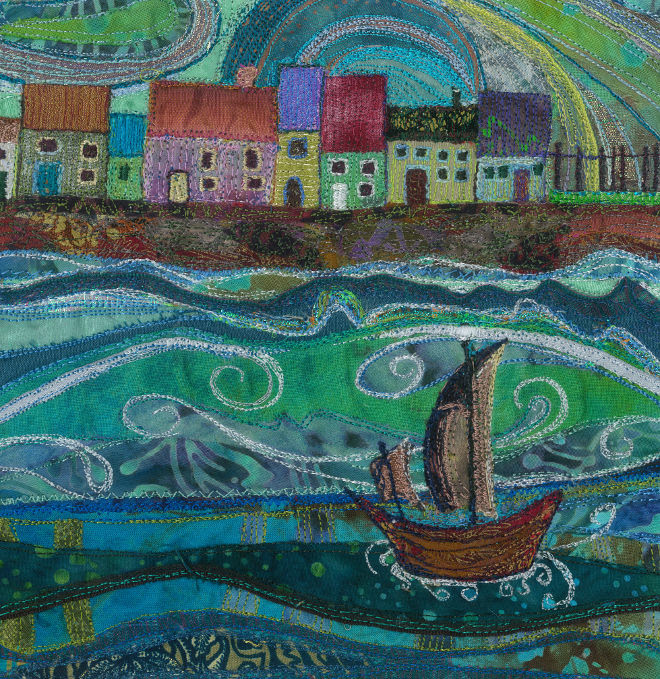 Almost Home by Rachel Wright
Rachel likes to work from photographs taken on walks or family holidays. “When I start to plan a piece, I will often sketch directly onto the calico before starting to work in the fabrics, “ she says. “I always like to have an image or several images to work from. I may not translate them literally but I think it’s important to know how something actually looks before you can start to play around with it.”
She adds: “My kids often get asked to draw things at school but are not given any reference to look at. It makes me mad because my dad always taught me to spend twice as long looking at the thing I was trying to draw, as I did actually making marks on the paper. Seeing what is really there is at least half the battle. It’s in noticing the small things that something becomes lifelike and realistic.”
That said, she has a passion for letting her creativity have free reign at times too. “I certainly like to allow my imagination in on the act. This is probably most evident in my foaming, swirling seas or my dynamic, dramatic skies.”
Find more of Rachel’s embroidered artwork at www.rachelwright.com.
Posted by ColorFilled at 7:38 AM No comments:

Mankind has been making marks since pre-history. The palettes used through the ages show the progress we have made in capturing color for art.


Posted by ColorFilled at 7:36 AM No comments:

How Does A Wine's Color Affect Us?

Wine aficionados say that drinking wine involves far more than a simple evaluation of taste. Aroma, temperature and a lovely bottle can all factor into our experience of, say, a Bordeaux. But, what if outside factors like a wine’s color, or even the lighting in the room we drink it in, can actually change how we perceive the flavor?


0:0id Munksgard, a winemaker at Iron Horse Vineyards in Sonoma, California, says he uses a bit of red wine in some of his sparkling blends to hint at what the bubbly might taste like — before patrons ever take a sip.

“It sets the stage,” David Munksgard says. “If the wine was in a dark glass and you couldn't see, your brain wouldn't be working on that. You would just simply go on what it smells like and then what it tastes like. But you can't help it as a human being to start thinking about what that wine is going to smell and then taste like.”
Charles Spence agrees that color and other sensory phenomena can prime our brains for flavor, setting expectations about the taste that anchor our experiences when we’re actually eating and drinking. Spence leads the Crossmodal Research Laboratory at the University of Oxford and has studied the effects of “mood lighting” on our perception of a wine’s taste. He says that our tendency to color-categorize flavors may have evolved to help us judge our food for both ripeness and toxicity.
“What kind of world would we be in if we had to put everything to our lips to ... know whether it is nutritious or poisonous or not?” Spence asks. “So our brains learned to make predictions and say, ‘OK, I've learned that when I see a ripe red fruit color, it's probably going to be sweet. When I see something that's green, probably it’s unripe, maybe sour or less nutritious.’ If I can make those predictions, then I’m in a better place to know what trees to climb for the nutritious fruits and what else to eat.”
To test the influence of color on a wine's taste, Spence and his team ran an experiment in 2014 in which they gave over 3,000 Londoners red wine in black tasting glasses, obscuring the beverage's color. They then asked people to sip the same drink under white, red and green lights and rate how they thought it tasted each time.
“What we were able to show with these 3,000 regular drinkers — not wine experts or such — is that we get about a 15 to 20 percent change in people's perception of the fruitiness or freshness of the wine, how much they liked it, simply as a function of the background illumination in the room in which they were tasting,” Spence says.
For example, Spence says that even when we can’t see into our wine glasses, a red-lit room can nonetheless prepare our brains to expect sweetness.
“When we had winemakers who came to the Color Lab, this event, they were the real experts,” Spence says. “You’d think they would not be affected by the background color — [that] they can just identify what is in the glass, and the taste and bouquet. Yet, they were coming away saying, ‘Wow, we need to know about this.’”
Spence says that other sensory information can also help us make snap judgments about a wine's character well before we sip. Did you pop a cork, or crack a screw cap? What sound did the liquid make when you poured it into the glass? Sound, Spence says, is the “forgotten flavor sense.”
“From the sound of pouring ... you can tell something about the temperature,” Spence says. “You can tell something about perhaps the glass size. You can tell something about the kind of drink that’s been poured, and maybe even the viscosity. What information is there? We never really think about it, because normally we can see the wine, and yet our brain picks up on these cues and they too can subtly change our expectations.”
What about when you (or a waiter) set the wine bottle on the table, perhaps with a satisfying thud? Spence says that too is a game of the senses, to a point.
“When we've tested or evaluated the six or seven hundred bottles in the Oxford wine store ... what you find is that for every extra pound you pay, you get eight extra grams of glass,” Spence says. “There are some producers out there who are making bottles that are maybe a two and a quarter kilograms of glass when the wine is emptied, compared to others where it's less than a kilo [when] full of wine.”
Ultimately, though, you can’t put lipstick on a pig — or pass cheap wine off as finer stuff in a heavy, stoppered bottle.
“It may be that midprice wines can be shifted all over the place, but what do you call it? ‘Two Buck Chuck?’ (No longer $2-BBL)You might have a bigger challenge,” Spence says. “Just by putting it in a heavier bottle, you might convince some, but I think not all.”
This article is based on an interview that aired on PRI's Science Friday.
Posted by ColorFilled at 12:40 PM 2 comments: