Bedroom Color: The Secret to More Sex and Sleep

Bedroom Color: The Secret to More Sex and More Sleep

More sleep and more sex? Yes, please! A new survey involving 2,000 Brits shows a strong correlation between the color of your bedroom walls and decor with how much sleep and sex you're having. The takeaway: People with blue rooms appear to be getting the best night's sleep, while people with caramel-colored walls are having the most sex. Let the mad dash to invent caramel-blue paint begin! Here's how the survey breaks it down.

Add to ideabook
by Leslie Banker Designs
Certain shades of yellow come in second in promoting the best night's sleep: seven hours and 40 minutes on average per night.Warm yellow relaxes the body by stimulating the nervous system and calming the nerves.

Add to ideabook
by DYS Home staging in N.J. by Yaxy Sysol
The survey suggests that a soothing silver bedroom mimics moonlight, which cues the brain to know that it's nighttime and time for sleep.People with silver bedrooms get an average of seven hours and 33 minutes of sleep, while 21 percent surveyed say they are more motivated to exercise in their bedroom.
Posted by ColorFilled at 12:55 PM 4 comments:

British hospitals use red trays in a program to combat malnutrition, but may have chosen the worst possible color, according to a study Wednesday linking the tinge of tableware to food enjoyment.
Researchers from the University of Oxford contributed data to the growing body of evidence that the color, size, weight and shape of eating utensils, cups and plates have a big influence on what people taste.
Their findings on cutlery tally with previous research for crockery colors, including the discovery that red tends to limit food intake, they said.
"Red could... be used to serve food to people who need to reduce their food intake, but should certainly not be used for those who are underweight," the team wrote in the journal Flavor.
British hospitals use red trays to make it easier for nurses to identify people who need help eating.
"Red appears to be the worst possible tray color... for those individuals who are being encouraged to eat more," the researchers warned.
In a series of experiments, the team used utensils of different colors, shapes and weight to gauge the impact on the perceived taste of the same food among dozens of volunteers with normal vision.
Among other things, they found food eaten from a knife tasted saltier than eaten with a spoon, fork or toothpick, and "more expensive" when eaten with lightweight plastic spoon.
Such outcomes may be explained by the role of advertising and packaging or an individual's personal associations with certain colours, said the team.
"How we experience food is a multisensory experience involving taste, feel of the food in our mouths, aroma, and the feasting of our eyes," the authors wrote in a statement.
"Even before we put food into our mouths our brains have made a judgement about it, which affects our overall experience."
Such knowledge could be used to subtly influence the eating patterns of people who ingest too much or not enough, said the authors.
In January this year, researchers at the Polytechnic University of Valencia and the University of Oxford said a group of volunteers had rated hot chocolate tastier when served in orange- or cream-colored mugs, compared to white or red.
Previous research had found that yellow containers boost the perception of lemon flavour in soft drinks; beverages with cold colors, like blue, seem more thirst-quenching than warm colors like red; and pink drinks are perceived as more sugary.
SourceAgence France Presse
Posted by ColorFilled at 10:37 AM 1 comment:

Posted by ColorFilled at 5:50 AM No comments:

The Color of Lightening

First, please do not try to view lightening bolts while standing outside. Be safe and view from inside only. Joe Murgo is a scientist who answers questions. The email link is below if there are things you want to know which only Joe can answer. 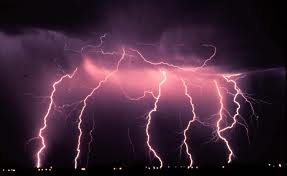 "There are multiple reasons as to why the lightning can appear as different colors, some can be more complicated that others. Let me first start off as to why the majority of lightning appears white. Lightning is extremely hot, thousands of degrees, which can be equivalent to the temperature on the surface of the sun. Anything that hot will emit all different waves of electromagnetic radiation, including all of the main colors of visible light. The sun emits all colors equally too, and if we take away the effects of molecules of air, the color of this light would be white. Separated, we can see all of the colors of the spectrum like in a rainbow. An easy way to remember the colors of a rainbow is to remember the name Roy G. Biv. This stands for red, orange, yellow, green, blue, indigo and violet. (I like this info to help students remember easily) The Roy colors are of a longer wavelength and are created with a cooler temperature than the Biv. This is why an electric stove that heats will first change to a reddish color, but then turns white the warmer it gets.

The light from a lightning bolt is the same as the sun, but like the sun, air molecules and water droplets can separate the colors out a bit. When there is a lot of haze and water vapor in the air, only the longer wavelength colors make it to your eye unless you are very close to the lightning. This will create a more reddish lightning strike. The same process will help to enhance a red sunrise or sunset when there are a lot of particles in the air. A reason for bluish or purple lightning is when a lightning bolt is close and bright, but with a lot of water in the air. This creates more of an illumination of blue around the bolt, and why I think you noticed the bluish and purple lightning. Even though you saw a bluish color, other people that were at more of a distance from that same lightning, probably would have observed a reddish color. What happened to the blue that you saw? The blue light will scatter so much before reaching the eyes of those distant observers."
If you have a question about the weather, you can write to Joe Murgo at 5000 6th Ave., Altoona, PA 16602 or email him at Murgo@wtajtv.com. Some questions will be answered here and all of the questions will be entered in a contest to be shown on WTAJ News at 5pm. 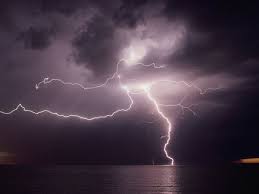 Posted by ColorFilled at 8:13 AM No comments:

(ILLUSTRATION: MAKEITDOUBLE/SHUTTERSTOCK)
• By Tom Jacobs •
The color red has a strange power over our unconscious minds. Recent research suggests it can increase one’s attractiveness, compel teachers to grade papers more harshly, and even prompt people to get vaccinated for sexually transmitted diseases.
Now we can add to the list: It can trick men into overpaying for “sale priced” items.
A study in the June issue of the Journal of Retailing reports that, in a series of experiments, “Male consumers perceived greater savings when prices were presented in red than when presented in black.”

Red can increase one’s attractiveness, compel teachers to grade papers more harshly, and even prompt people to get vaccinated for sexually transmitted diseases.

“When men see prices in red, they feel more positively and perceive greater savings,” write researchers Nancy Puccinelli, Rajesh Chandrashekaran, Dhurv Grewal, and Rajneesh Suri. “In contrast, women appear immune to the effects of prices in red, due to their tendency to process ads in greater depth.”
In one experiment, 163 graduate business students at an East Coast university were asked to imagine they were setting up an apartment. They then looked at a mock retail ad featuring three toasters and two microwave ovens.
Half saw a version of the ad in which the prices were printed in black ink; the others saw an alternate version in which the figures were in red. After examining them, participants were asked to (a) evaluate whether they felt the store was offering genuine bargains, and (b) describe their emotional state—specifically how happy, pleased, and glad they were feeling at that moment.
The results: “Males perceived greater savings at the store when the prices in the retail ad were presented in red,” the researchers report. “However, no such effect of color was observed for female participants.”
This perception appears to be emotion-driven. Men who viewed the red prices reported they were feeling more positive emotions, compared to men who looked at the black prices. The color did not have this effect on women.
For another experiment, featuring 152 graduate students, participants indicated their level of knowledge about toasters and microwave ovens, and their “interest in learning about kitchen appliances.” They then viewed the aforementioned ads.
The gender difference again appeared, but only among men with relatively low levels of knowledge or interest in the items. This suggests that the red-equals-savings trick only works when men aren’t particularly engaged, and are thus more susceptible to such cues.
So the message seems to be: Don’t send your husband to the store to buy a new microwave, or any other appliance he’s uninterested in. If the store is savvy enough to print the prices in red, he’s apt to come home having spent too much.
Posted by ColorFilled at 4:41 PM 1 comment: