The amazing use of color change, inherent in chameleons, is now warning of dangerous chemical leaks in industries. Brilliant scientists developed a life-saving system for workers. 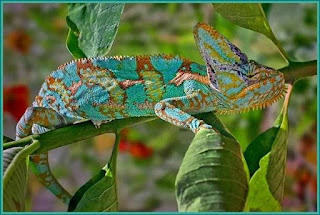 The amazing chameleon  has the marvelous ability to see the color patterns of their environment and can closely match these designs by changing the color patterns in their skins.
Recent advances in pigment technology have produced “smart pigments” that change color in response to specific changes in local environmental conditions. These emerging products are finding valuable applications at aerospace, power, and manufacturing, and oil/gas facilities.
INTELLIPIGMENT TAPE CHANGES COLOR TO INDICATE HYDROGEN LEAKS 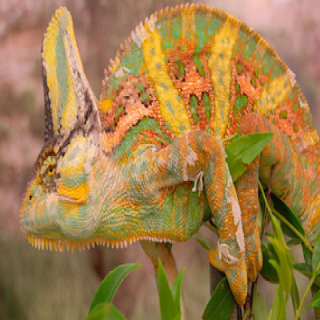 A specialty tape containing proprietary color-changing pigments can be wrapped around pipe fittings, flanges, valves, and storage/transportation vessels and will immediately change to black at locations where hydrogen gas is detected. Under a grant from NASA, researchers at the University of Central Florida developed a color-changing (chemochromatic) tape starting with a powder patented by Japanese researchers that changed color in the presence of hydrogen. The critical improvements by the Florida researchers involved adjusting the chemistry so that the color change was immediate and visible to the naked eye (NASA Technology, Spin-Off, 2016). This research project received numerous awards including “NASA Commercial Invention of the Year” in 2016. The technology is licensed to HySense Technology which sells a product, Intellipigment tape, for detecting hydrogen gas leaks.
The advantage of this chemochromatic tape is obvious and can save time and lives. Previously, workers would use electrochemical and combustible gas sensors to identify the presence of possible leaks in areas where many hydrogen transfer lines were present, but locating the specific leak of the colorless, odorless gas was time-consuming. However, with the lines wrapped, the location of the leak would be immediately located by the worker since the tape at the site of the leak would change from a tan color to a black color.
SMART PAINT SIGNALS WHEN EQUIPMENT IS TOO HOT TO HANDLE
A paint for use in coatings and packaging changes color when exposed to high temperatures – thus, delivering a visual warning to workers handling material or equipment with the potential to malfunction, explode, or cause burns when overheated. The coatings turn different shades of color from red to blue in response to a range of temperatures, beginning at 95 degree F. (New Jersey Institute of Technology, Press Release, 2014). Further, this material can indicate how long a substance has been exposure to high temperature high enough to comprise its functionality.
Article written by: Eric Isselée

Posted by ColorFilled at 1:59 PM No comments: 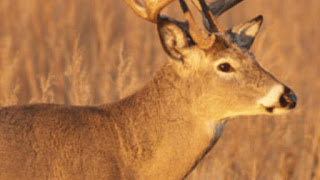 Q. Why does the fur coat of a deer change colors depending on the time of year—a reddish color in the spring and brown in the fall?
A: The deer's coat is designed to provide both a means for thermoregulation and camouflage. Summer coats appear reddish and are thin, allowing deer to better cope with heat stress. In the fall, deer begin a process of molting, which is triggered by hormonal changes that reflect the changing seasons. The reddish summer coat turns into a faded gray or brown color as the new winter coat begins to grow.
A deer's winter coat is comprised of two layers. The outer guard hairs are hollow, stiff and grow about 2 inches longer than the undercoat. The inner layer is soft and dense which insulates deer from the cold weather and snow. Coat color, regardless of the season, tends to be darker in forested areas and lighter in agricultural areas where deer are exposed to more direct sunlight.
-- Michelle Carstensen
Carstensen is wildlife health program supervisor for the Minnesota Department of Natural Resources. 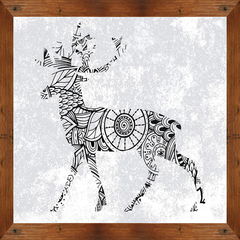 This deer made with patterns would look wonderful with many colors.
Posted by ColorFilled at 12:46 PM 1 comment:

Color is my passion, you know that if you have been reading these Colorfilled posts. Art history is another passion. I so admire the information generated for About.com by Shelley Esaak because she researches so well. Another passion of mine is Fauvism. You will discover more about this movement in her article, below. I am proud to say that I have been accused of being a Fauvist artist also!


Related Articles"Fauves! Wild beasts!"
Not exactly a flattering way to greet the first Modernists, but this was the critical reaction to a small group of painters exhibiting in the 1905 Salon d'Automme in Paris. Their eye-popping color choices had never before been seen, and to see them all hanging together in the same room was a shock to the system. The artists hadn'tintended to shock anyone, they were simply experimenting, trying to capture a new way of seeing that involved pure, vivid colors. Some of the painters approached their attempts cerebrally while others consciously choose not to think at all, but the results were similar: blocks and dashes of colors not seen in nature, juxtaposed with other unnatural colors in a frenzy of emotion. This had to have been done by madmen, wild beasts, fauves!

How Long Was the Movement?

First, bear in mind that Fauvism wasn't technically a movement. It had no written guidelines or manifesto, no membership roster, and no exclusive group exhibitions. "Fauvism" is simply a word ofperiodization we use in place of: "An assortment of painters who were loosely acquainted with one another, and experimented with color in roughly the same way at roughly the same time."
That said, Fauvism was exceptionally brief. Starting with Henri Matisse (1869-1954), who worked independently, a few artists began to explore using planes of undiluted color around the turn of the century. Matisse, Maurice de Vlaminck (1876-1958), André Derain (1880-1954), Albert Marquet (1875-1947) and Henri Manguin (1875-1949) all exhibited in the Salon d'Automme in 1903 and 1904. No one really paid attention, though, until the Salon of 1905, when all of their works were hung together in the same room.
It would be accurate to say that the Fauves' heyday began in 1905, then. They picked up a few temporary devotees including Georges Braque (1882-1963), Othon Friesz (1879-1949) and Raoul Dufy (1877-1953), and were on the public's radar for two more years through 1907. However, the Fauves had already begun to drift in other directions at that point, and they were stone cold done by 1908.

What Are the Key Characteristics of Fauvism?

Post Impressionism was their primary influence, as the Fauves either knew personally or intimately knew the work of the Post-Impressionists. They incorporated the constructive color planes of Paul Cézanne (1839-1906), the Symbolism and Cloisonnism of Paul Gauguin (1848-1903), and the pure, bright colors with which Vincent van Gogh (1853-1890) will forever remain associated.
Additionally, Henri Matisse credited both Georges Seurat (1859-1891) and Paul Signac (1863-1935) for helping him discover his inner Wild Beast. Matisse painted with Signac -- a practitioner of Seurat's Pointillism -- at Saint-Tropez in the summer of 1904. Not only did the light of the French Riviera rock Matisse on his heels, he was bowled over by Signac's technique in that light. Matisse worked feverishly to capture the color possibilities whirling in his head, making study after study and, ultimately, completing Luxe, Calme et Volupte in 1905. The painting was exhibited the following spring at the Salon des Independents, and we hail it now as the first true example of Fauvism. 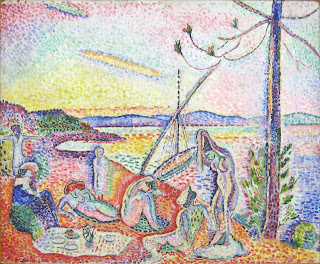 Fauvism had a large impact on other expressionistic movements, including its contemporary Die Brücke and the later Blaue Reiter. More importantly, the bold colorization of the Fauves was a formative influence on countless individual artists going forward: think of Max Beckmann, Oskar Kokoschka, Egon Schiele, George Baselitz, or any of the Abstract Expressionists to name just a few.

Posted by ColorFilled at 2:57 PM No comments: