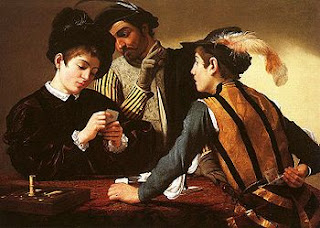 Caravaggio could have benefited from anger-management therapy. He careened from one brawl to another from his teen years until his death at age 39.  He walked around armed to the teeth and, on one occasion, he committed murder.

Yet if Michelangelo Merisi da Caravaggio had a penchant for trouble, he also had a gift for creating dramatic, unflinching art that brought new emotion to tired religious themes. He also had a knack for attracting powerful patrons so enthralled by his talent that they repeatedly rescued him from scandal.

His early childhood was spent in the luxurious Forza household in Milan, but that comfort ended when the plague swept through Lombardy. His uncle, grandfather and father all succumbed on the same day. Caravaggio was only six years old.

At age twelve, he was apprenticed to a painter in Milan. The next four years are a blank, but at age sixteen he turned up in Rome, utterly destitute.

He worked as a servant, churning out three portrait busts a day in the studio of a Roman hack artist. He finally found the time and money to complete a few paintings. Some are self-portraits; others take as their theme life on the streets and in the brothels of Rome.

The Cardsharps, shown above, is a scene the artist might have seen played out dozens of times; a wealthy and innocent young man being fleeced by two practiced cheats. The wealthy Cardinal del Monte spotted the painting in a local shop and was so impressed he invited the artist to work as a painter-in-residence in his household.

Well fed for the first time in years, Caravaggio completed paintings for powerful church officials and religious institutions around Rome and soon developed his mature style. 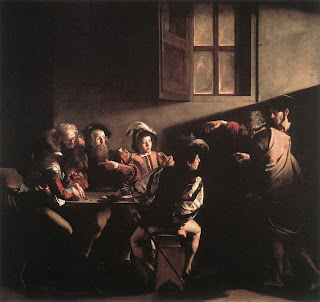 The Calling of St. Matthew
The work depicts the moment Christ selects the sinner Matthew to be his disciple. The painting is set in a grimy tavern, with five men sitting around a battered old table. Jesus, accompanied by another disciple, stands in the doorway and points to Matthew, who in turn points to himself as if to say,"Who, me?"
Earlier artists used hovering angels or parting clouds to signify the moment of conversion, but Caravaggio's solution is much simpler. Light indicates the touch of grace. It pours in behind Christ and falls full upon Matthew, while the rest of the painting is plunged into dreary shadow. Caravaggio pioneered this chiaroscuro style, characterized by extremes of light and shadow. This became his hallmark.
The hand of Christ is a reversed image of Adam's hand touched by God, painted by Michelangelo Buanarroti in The Creation of Adam in the Vatican's Sistine Chapel. 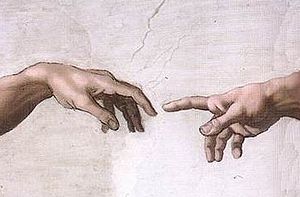 This Baroque artist deserves more coverage, and I will fill in the rest of his story in a subsequent post. The art historian, Bernarad Berenson said: "With the exception of Michelangelo, no other Italian painter exercised so great an influence."

I am indebted to Elizabeth Lunday's colorful book of art history, Secret Lives of Great Artists for the information supplied.
Posted by ColorFilled at 5:46 PM No comments:

Artist Helga Steppan arranged all of her worldly possessions into a series of compelling photographs, all of which consisted of items of a single color. Reds, blues, greens, blacks, greys – when arranged in this highly unconventional way, the objects look otherworldly.


This idea might work well if you were gathering accessories to complement a newly painted room. And, if you cannot determine what your favorite color is, dividing things into color families would give lots of information about your preferences.

Let me know if you sort things via color, it could be eye-opening!

Our language is colorful and there are all kinds of concepts described by colors. For example:

If you think of more, please leave them in the comments section below.
Posted by ColorFilled at 10:04 AM No comments:


The six colors of the spectrum have contributed significantly to expressions and turns of phrase that are themselves often quite colorful. Here’s a sampling of idioms employing the words for colors.


Because of the association of the color red with danger and deficits, most idioms that include the word red — for example, “in the red” (meaning “in debt”) “red tape” (referring to bureaucratic complications), and “seeing red” (being so angry that one’s vision is blurred) — have negative associations.


However, they overshadow a few positive ones: “paint the town red” (enjoying oneself dining and drinking), “red-letter day” (an occasion for celebration), and “red-carpet treatment” or “roll out the red carpet” (referring to paying special attention to someone, based on the color of carpeting usually seen at the entrance to a gala event for celebrities or VIPs).


A red herring is a deliberate diversion, a red-eye flight is a late-night airplane trip (from the bloodshot eyes of tired passengers), and to have a red face or to go beet red is to be embarrassed.


Among the colors of the rainbow, orange is curiously absent from idiomatic usage. Although it is a bright, cheerful color often found in nature, the only common expression that uses the word orange employs the plural form referring to the fruit of that name –“apples and oranges,” meaning “unrelated subjects or issues,” to emphasize irrelevance.


The few idioms incorporating the word yellow have negative connotations. To have a yellow belly or a yellow streak down one’s back (the reason for the choice of locations is obscure) is to be a coward, and yellow journalism, based on an early comic strip character named the Yellow Kid, is that which is sensational and/or biased.

The phrases “green-eyed monster,” an epithet for jealousy, and “green with envy” are perhaps based on the idea that one’s complexion turns a sickly hue when feeling these emotions; similarly, to say that someone looks green (or is green around the gills) means that they appear to be sick.


But green also has positive connotations: To give someone the green light, based on the universal traffic-signal color to indicate “Go,” is to approve a proposal. If you have a green thumb (or, in British English, green fingers), you are adept in gardening — probably because successful gardeners are apparent from the green pigmentation that rubs off from healthy plants to their hands as they handle the vegetation.


Because US paper currency is green, in American English, the color is associated with money and wealth.

Because it is the color of the sky, blue is associated with idioms such as “out of the blue,” “like a bolt from the blue,” and “out of a clear blue sky” that refer to a person, thing, or idea that arrives as if from nowhere. (“Into the wild blue yonder,” meanwhile, refers to a venture into unknown territory.)


“Blue collar” connotes people who work at a trade or as laborers, because such workers at one time commonly wore durable shirts made of blue cotton (as opposed to “white collar,” referring to dress shirts worn by professionals and office workers, and “pink collar,” a later, now frowned-on, reference to women in clerical positions, so labeled because men rarely wore pink.)


Two idioms generally negative in sense include blue-blooded, meaning “aristocratic,” probably because during the era in which the term was coined, nobility tended not to spend time in the sun and their veins showed blue under their pale skin, and “blue-eyed boy,” referring to a favored protégé; this phrase likely stems from the fact that fair-skinned and fair-haired people, who at one time had a social advantage over their swarthier counterparts, are likely to have blue eyes.


Other negative idioms include the use of blue to refer to a sad or bleak mood, as well as “black and blue,” meaning “bruised,” from the color of bruised skin, and “blue in the face,” referring to someone trying (in vain) to persuade another until, from lack of breath, they attain this state.

Purple, also called violet, like its color-spectrum counterpart yellow, has little representation in idiomatic language: Purple prose is that which is overwrought or overly complicated, and a shrinking violet is a shy person, though the usage is usually employed in such phrases as “not a shrinking violet” to refer to someone who is anything but shy.


The color purple, because materials for dying fabric in that color were rare and therefore expensive, was reserved for royalty or the wealthy in western cultures and still has an association with nobility. This association resulted in another idiom, “born to the purple,” meaning “someone born to royalty during their reign” and, by extension, referring to children of prominent people.
Posted by ColorFilled at 9:21 AM No comments:

Controlling color in an environment is something we all accomplish when we paint a room. How do you think you would like to live in the apartment pictured below? The color changes in the surrounding landscape influenced the selections.

Plenty of people organize their belongings by color, but this apartment in Stockholm, Sweden might be the only home that is entirely color-coded. The artists and architects involved in this unique color scheme drew their inspiration from the surrounding trees and plants which themselves cycle through a series of colors with the changing of seasons.


"Live each season as it passes; breathe the air, drink the drink, taste the fruit, and resign yourself to the influences of each."
Henry David Thoreau (1817-1862)

Perhaps Thoreau would have enjoyed this apartment as his Walden.
Posted by ColorFilled at 9:56 AM No comments:

I find it interesting that Pantone picked Monaco Blue, practically the exact opposite of its last year's pick, a vibrant tangerine. Ye ole Color Wheel has been spun!

Pantone has just announced that its top color for spring 2013 is indeed a shade of blue: Monaco Blue to be precise, which is kind of like a duller navy and cobalt hybrid. Compared to the glorious tangerine of just one year past, it's a little boring.
Pantone Color Institutes's executive director, Leatrice Eiseman, explained to WWD that the shade "speaks to the practicality that we are seeing in society. You have to realize there is still concern out there for the economy." Speaking of practicality, note that the runner up color is also a blue—Dusk Blue.

The other 8 top colors>>
Luckily, we won't all have to spend the entire spring walking around like giant blueberries. The third and fourth most popular colors are both greens, Emerald and Grayed Jade, and the rest of the list is as follows: Linen, Poppy Red, African Violet, Tender Shoots, Lemon Zest, and Tangerine's not-as-cute cousin, Nectarine.

The whole shebang, via WWD

Pantone is pretty pumped about their color choices, though the way they chose to describe each shade makes them sound kind of lackluster. Eiseman described Linen as "another version of the kind of nude shade that almost disappears," and African Purple as "not a bright, knock-your-socks off purple." If socks are something you're looking to knock off, might be we suggest pairing Lemon Zest and Tender Shoots?"

Despite these color stars, I always say to wear what compliments your own coloring, at least near your face. When you do that, you will look alive!
Posted by ColorFilled at 8:18 AM No comments:

It's Never Too Late to Paint

Grandma Moses' "When Leaves Turn"
Oil on Canvas
September's artists with birthdays are:

Posted by ColorFilled at 6:24 PM No comments: