Van Gogh's only sale during his lifetime 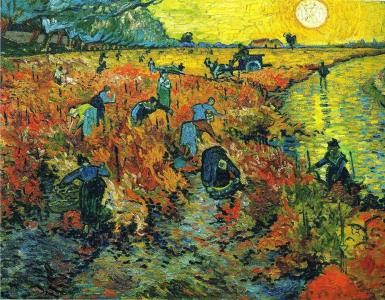 The one painting Vincent van Gogh sold during his lifetime was Red Vineyard at Arles
(The Vigne Rouge), which is now in the Pushkin Museum of Fine Arts in Moscow.
It was exhibited in Brussels in 1890 at the annual exhibition of Les XX, and sold

for 400
francs.
It was bought by the Belgian artist and art collector Anna Boch. Vincent was  a friend  of her brother, Eugène Boch, A portrait Van Gogh painted of him is now in the Musée d'Orsay in Paris.

Anna Boch bought the beautiful landscape painting, dominated by red and yellow, with a composition that leads the
eye into the distance towards the setting sun.
In a letter to his brother Theo written in
Arles around the 6th of November 1888,
Vincent describes the scene he subsequently painted.in a letter to his dear brother.

"The Red Vineyard
We saw a red vineyard,
Completely red like wine.
In the distance, it became yellow
Against a green sky with a sun.
Fields violet and sparkling,
Yellow here and there after
The rain in which the setting
Sun was reflected."

After his death five months later, and that of his brother Theo soon thereafter, it was
Van Gogh's sister in law Johanna van Gogh who established a market for Vincent's paintings. She also delayed the publication of his letters so that
the public would get
to know the paintings before the man. "It would have been unfair to the dead artist to arouse interest in his person before the work, to which he had sacrificed his life, was recognized and appreciated as it deserved to be."

Posted by ColorFilled at 4:57 PM 2 comments: