A good way to start off this new year is to use color knowledge to make yourself more colorful. . Imogen Lamport, an Australian wardrobe consultant, has an interesting way of using the color wheel to combine colors for knockout clothing recommendations. Her thirty day class, online, of "shopping your closet" for more stylish use of clothes, shoes, scarves and jewelry one already owns is fun and informative. You can go to her website for more information on fashion and her next 30 Day Challenge. See www.Insideoutstyle.com. for the scoop on her EVOLVE YOUR STYLE adventure, or go to Imogen's Facebook page to learn more details. This class costs only $5.00, this year's first bargain!

Take this opportunity to try some new color combinations.  Why not try a different combination, particularly if you are normally as Neutral plus a color kind of dresser!

Combining Colours by imogenl featuring biking jackets
Monochromatic – shades of the same color. Many people think this means the exact same color head to toe, but in fact it doesn’t., it means one color – as in shades of one color, so you can have light and dark versions of a color.

Analogous – 2-3 colors next to each other on the colour wheel.
Posted by ColorFilled at 2:21 PM 1 comment:

The Saga of the century continues...


It was the scandal of the century which added an intriguing twist into the already fascinating life of Norfolk’s great sea hero.

Lady Emma Hamilton
The passionate love affair between Lord Horatio Nelson and Lady Emma Hamilton lasted just six years but it transformed their lives, their respective positions in society and the public’s perceptions of them both.
Now a letter written by Nelson to his mistress, which gives an insight into his turbulent love life, has come to light.
It is up for auction in London later this month when it is hoped the letter could fetch up to £8,000.
Nelson, from Burnham Thorpe, was clearly in an emotional state when he wrote the letter.

The letter from Lord Nelson to his mistress Lady Hamilton, which is being put up for auction and estimated to be worth up to £8,000
In it he refers to a disagreement between himself and Lady Hamilton the previous evening.
He takes care to note his devotion to her and vows to defend her integrity amid the scandal.
The exact date when the letter was written is not known, but experts believe it was written in 1801, based on how he signed his name as simply ‘Nelson’, which he was known to do at this time.
It was a time when Lady Hamilton had given birth to their child Horatia and their affair was public.
Despite Nelson’s wife’s demands, he refused to relinquish Lady Hamilton as his mistress and eventually he left his wife.
In the 19th century, this was an unthinkable social affront and he aggravated the scandal further by choosing to live with Lady Hamilton and their daughter, Horatia, upon his return from sea.
The year 1801 was also when Nelson had an instrumental role in winning the Battle of Copenhagen.
Nelson was second in command of the expedition to attack Denmark and, on the back of this victory, he was appointed commander in chief of the Navy.

“Many of Nelson’s letters were kept as memorabilia because he was such a legend in his own time.
“Anything Nelson-related that we deal with always attracts a huge amount of interest.
“We have auctioned a few Nelson letters but this one is particularly special because it is so emotionally-driven and direct.
“It gets to the core of the relationship between Lord Nelson and Lady Hamilton which was a huge scandal at the time.
“The Nelson letters we have dealt with in the past have been more formal and relating to naval concerns.”
During the scandal, Nelson urged Lady Hamilton to destroy the letters sent between them, as he largely did.
Lady Hamilton, however, chose to keep her letters which were eventually published in 1814, contributing to her downfall.
Plagued by politics and social disgrace, their affair lasted only six years before Nelson’s death at the Battle of Trafalgar in 1805.
As he died he repeated the plea he had made for the government to take care of Lady Hamilton and their daughter.
But, despite this, Lady Hamilton’s life after Nelson’s death was a catalog of debt and betrayal.
The government heaped money on Nelson’s family while Lady Hamilton and Horatia received nothing.
By 1812 Lady Hamilton was deep in debt and fled to France with her daughter to avoid creditors.
When Nelson’s letters to her were stolen and published in 1814 as the ‘Letters of Lord Nelson to Lady Hamilton’, she lost any chance of government sympathy or money, and by the following summer she was imprisoned for debt in the King’s Bench Prison.
On her release in the autumn, she fled the demands of her other creditors by hurrying to Calais with Horatia. There, her spirit finally failed her. She grew progressively weaker, and died in January 1815, aged 49.
Horatia returned to England and lived with Nelson’s sisters.
At 21 she married her neighbor, the Reverend Philip Ward, and died in 1881, the mother of eight and grandmother of many.


She never forgot the harsh treatment her mother received from the press.

The English painter George Romney became infatuated with Emma, Lady Hamilton. He depicted Emma dressed in various costumes. If his portraits are truthful, it is easy to see why he was smitten with her. He met her when she was seventeen. He painted over sixty portraits of her in various poses as historical or mythological figures.

Emma Hamilton was born on the 26th of April 1765, nee Amy Lyon, the daughter of a blacksmith who died when Emma was only two months old. Her mother raised her. Emma became a maid in various wealthy homes. She had no formal education. One of her rich patrons changed her name to Emma Hart. When she was seventeen years old she was sent to Naples, Italy by a lover so he could marry a rich woman to replenish his fortune. Emma was sent to his wealthy uncle, Lord Hamilton, so Emma could be hostess to his lavish parties. 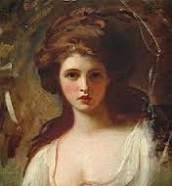 George Romney met her in Naples in 1782. Emma designed a mime art show called “Attitudes” where she portrayed famous women such as Cleopatra and her audience was asked to guess who she depicted by studying her postures, dance and acting. This form of charade became a sensation with visitors from across Europe and set off new dance trends and fashion for a draped Grecian style of dress. She got the idea for her theatrics from the various characters Romney asked her to emulate in the portraits he painted.

She married Sir William Hamilton in 1791 when she turned 26; her groom was 60. Emma became a close friend of Queen Maria Carolina, sister of Marie Antoinette and wife of Ferdinand I of Naples. In 1793, Carolina introduced her to Admiral Horatio Lord Nelson in 1793 when he arrived in Naples to recruit reinforcements for the English Navy for their battles against the French. Five years later, Nelson returned to Naples as a living legend and hero. He lost an arm and most of his teeth during sea battles and was prone to coughing spells. Emma insisted she could nurse him back to health and he resided with Lord and Lady Hamilton at their palatial home, Palazzo Sessa in Naples.
.
Emma invited 1,800 guests to Admiral Nelson’s 40th birthday celebration. The Lady and the Admiral were infatuated and produced a love child, Horatia who was born in 1801.Lord and Lady Hamilton and Admiral Nelson continued to live together, causing a scandal at the time.  Emma refused to divorce Lord Hamilton; he died in 1803 of amoebic dysentery shortly after their return to England. The British Admiralty sent Admiral Nelson to sea to try to quieten the scandal.  Admiral Nelson died at the naval battle at Trafalgar in 1805. These deaths impoverished Emma. She and her daughter fled to France where, at age 49, she also died of amoebic dysentery, probably contracted in Naples.
Horatia married Reverend Philip Ward and the couple produced ten children.

Read more about these characters of an actual 18th century melodrama at Wikipedia.com. More portraits of Emma by Romney are also viewable. One of my favorite research  revelations was that Horatia named one of her sons Marmaduke!

Monet's Range of Colors Are Logical 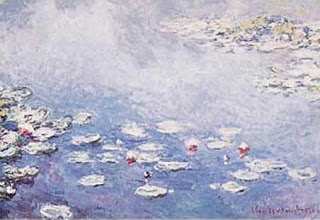 Here we have a Monet that is light in value 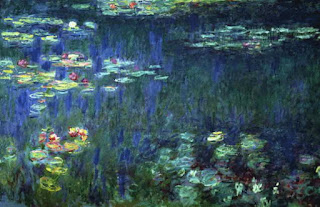 Here we have a Monet that is mostly deep in value. 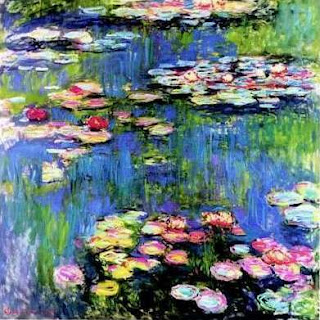 Here is a mostly bright and clear (high intensity) picture 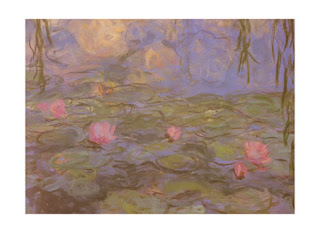 and here is one that is muted and has a low saturation of colour. 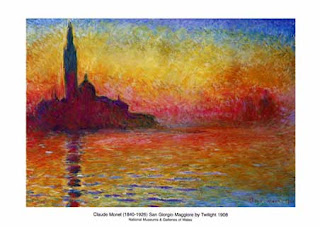 This picture has a warm undertone 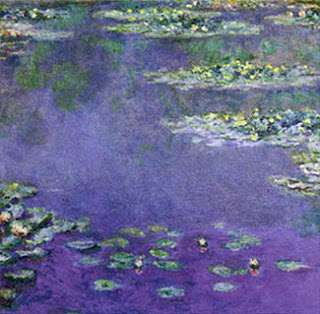 This one has a cool undertone.

So  green (or any color) can be warm or cool, light or dark, bright or muted, all at the same time!  So of course you can have a light cool green, or a light warm green, that light cool green could be brighter, or more muted, it could be really light or only medium light.  It could be a very cool green or only a slightly cool green.
When we think about these different aspects of color and colors that blend well together, we may look for overall light, cool and clear colors, or alternatively warm, deep and muted colors (as a couple of examples).
It would look very odd if Monet had put a bright color or two into a muted painting, just  like it doesn’t work in interior design or when combining colors in clothes if we combine colors that have no properties in common together.
Posted by ColorFilled at 6:12 PM 2 comments: