The Biology Behind Human Skin Color

This fascinating subject is explained so clearly in the following article. It makes me wonder if fair-skinned people using sun block regularly would change skin color if they stopped using it. And, I am not talking about getting a sunburn which gives a short-lived pink tint to light skin.

Sammy Jo Hester
Duane Jeffery poses for a portrait in his home. He is a columnist who has written for the Daily Herald for nearly 25 years. SAMMY JO HESTER, Daily Herald

Duane Jeffery writes for Science & Society
I remember the cod liver oil. Mom fed it to me almost religiously. “It’ll make your bones strong,” said she, “so you don’t get rickets.” Even after she described rickets, I could not really envision the condition.
But I’ve seen plenty of photos of it since and learned that it is tied up with climate and the color of one’s hide. So let’s go there.
The first thing to realize is that skin color is a tough subject to study. One can’t just use people’s faces — they’re too subject to color alteration due to sun and weather, even tanning or whitening agents. So researchers have settled on using comparisons from one body area not much exposed to those effects: the color of the inner upper arm. Unless you’re an expert on those, be a little tentative about what you think you know about human skin colors.
The second point is that the genetic basis of color is not simple either. We’ve got a few genes identified which have major effect, but there are others with minor effects and we don’t yet have detailed gene sequencing studies to resolve the issue.
In addition to all this, the subject has been so politically explosive that few researchers want to get involved. One major exception is Nina Jablonski of Pennsylvania State University who has spent more than 20 years on the subject. Others have joined in, but I rely here mostly on an article in the November 21, 2014 issue of Science featuring her work, and her 2012 book "Living Color."
Humans make two major types of skin pigment: Eumelanin gives the browns and blacks of darker-pigmented people. Pheomelanin gives various shades running from yellow to red. All people except albinos have both these pigments, and the relative amounts thereof account for the color differences of peoples worldwide. And these are not reliable indicators of “race” — a term which has no objective value at all. There is more color variation within each of the traditional “races” than there is between them, and color is useless as a categorical term.
But there are geographical patterns, of course. Peoples living near the equator are more darkly pigmented, and among those groups (as elsewhere, e.g., Tibet, Bolivia) those living at high altitudes or near the oceans have the higher levels of eumelanin. In contrast, peoples living farther from the tropics have the highest levels of pheomelanin and are light-skinned, with yellow or red hair common. Similarly, peoples with higher eumelanin ratios have the greatest ability to tan — not always obvious with the already dark pigmentation — and those with higher amounts of pheomelanin are most likely to sunburn. Tanning is a property of eumelanin production.
Humans, according to overwhelming evidence, began in Africa. Our ancestors there probably had dark pigmentation. As peoples moved elsewhere in the world (the great “human diaspora”), nature progressively selected pigment variations (reduction, some re-acquisition) that best fitted their new environments. That takes at least a score or more thousand years. So now let’s go to the biology.
Ultraviolet radiation (UVR) from the sun is of course most intense in equatorial regions.  It is more intense at high elevations. And it reflects much more from water surfaces than from terrestrial environments, so persons living on the ocean coasts are exposed to more than those living inland.
UVR generates Vitamin D in the skin. We need that for bone strength, a good deal of immune system function, heart health, and other basic body functions. Too little Vitamin D and children get rickets -- adults are subject to osteoporosis and other diseases.
But one can get too much sunlight as well. Sunburn is an obvious condition, and that relates to higher rates of skin cancers. But UVR also appears to destroy folate, well-established as critical for neural tube development in developing fetuses. So nature has to balance the UVR level that produces healthy bones while not generating so much that it destroys folate and causes conditions such as spina bifida. Tanning is helpful for this in peoples of moderate skin color. They live primarily in areas of seasonally-variable UVR: intense amounts in the summer, much less in the winter. Tanning thickens the skin and generates eumelanin production in summer and reverses that process in winter.
Human migrations, particularly in the last 400 years, have produced many “mis-matches” — people living in areas and in cultural conditions for which their bodies are not adapted. It was high levels of rickets and tuberculosis among freed African slaves who moved into America’s northeastern states after the Civil War that produced studies to demonstrate that they were not getting enough Vitamin D for healthy bones and immune systems.
Cod liver oil solved the problems, and helped even lighter-pigmented people in temperate zones who may have not gotten enough Vitamin D in winter.
Posted by ColorFilled at 8:47 AM 1 comment:

Would you please explain the variation in spelling of the word gray vs. grey?

Short answer: gray is standard American spelling and grey is British spelling for the same color.
The spellings have bounced back and forth.
The Old English stem was spelled grǣg.
According to the OED, ”The variation between spellings in ei, ey, etc., and in ai, ay, etc., in later Middle English results from the general Middle English merger of the ei and ai diphthongs.” Examples of spellings that evolved from the merger are clay, gray, grey, and whey.
In Dr. Johnson’s 1755 dictionary, the entry for the adjective is spelled gray: “white with a mixture of black.”

A note in the OED describes an informal inquiry made in 1893 that found differences among the usage of British publishers:

the printers of The Times stated that they always used the form gray; Messrs. Spottiswoode and Messrs. Clowes always usedgrey; other eminent printing firms had no fixed rule. Many correspondents said that they used the two forms with a difference of meaning or application: the distinction most generally recognized being that grey denotes a more delicate or a lighter tint than gray. Others considered the difference to be that gray is a ‘warmer’ colour, or that it has a mixture of red or brown.’

Various attempts have been made at different times to establish different colors for gray and grey. Here’s one from 1867:

G. W. Samson Elem. Art Crit. v. i. 483. Professional, if not primitive English usage has made a distinction between gray andgrey. The spelling gray may with propriety be employed to designate admixtures in which simple black and white are employed. The form grey may indicate those admixtures which have the same general hue, but into which blue and its compounds more or less slightly enter.

Individuals may prefer one spelling to the other, but the rule is, American spelling gray; British spelling grey. 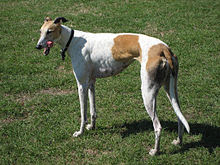 Note: The grey in greyhound has nothing to do with the animal’s color. The OED tells us that this grey is “apparently a first element cognate with Old Icelandic grey, “bitch.” The Old Icelandic word for a female dog is greyhundr. In English the word came to mean a particular kind of dog:

A breed of fast-running, keen-sighted dog having a long slender body and head and long legs, long used in hunting and coursing, and now used in racing; a dog of this breed.


Color note: Grey/gray in decor is a very depressing color according to color psychologists. Imagine  living in overcast, rainy skies perpetually; to me, not a happy thought. BBL
Posted by ColorFilled at 9:22 AM 1 comment:

Building a Wardrobe Inspired by A Painting

Vincent van Gogh was a master colorist. One of my favorite fashion sites is titled The Vivienne Files. The blogista, Janice Riggs, is a genius at choosing clothing capsules which make terrific ensembles, but her post from December 2012 is still a classic, mainly because she uses one of my favorite Van Gogh paintings as the starting point. What a smart way to put together a good looking, classic outfit. See more of her "Start with Art" capsules at www.theviviennefiles.com. She has been inspired by many paintings.

sand, sky, and deep water - the perfect juxtaposition of
cool and warm colors...

As far as tradition in China is concerned, there is no such thing as a color system as a Western dictionary would define it. In the Western world, , for example, had attempted to find a harmony of colors. The Chinese strove toward similar interpretations, and between the 4th and 2nd century oriented themselves on the same pentatonic scale that dominated their music. Accordingly, they accepted that in its entirety  comprised five basic colors: the four cardinal points are defined by red in the south, standing for summer and fowls and poultry; green lies to the east and represents spring, wood and the dragon; black is to the north and stands for winter, water and the tortoise; white is placed in the west and represents autumn and the tiger. Yellow, on the other hand, is allocated a special place and is therefore discussed in more detail. (Detailed text)


Chinese tradition regards mankind, society and the world equally, as the objects of a global knowledge — a knowledge which incorporates the macrocosm and the separate microcosms it contains.
In the illustration, the five basic colors of the Chinese tradition are arranged according to their equivalents:
Red: fire, reaching upwards, corresponds to the south as dictated by the traditional Chinese cardinal points, and coincides with the warm season of summer.
Black: water, delving into the depths, is in the north. Its season, winter, is marked by the absence of water, which at this time gathers in the northern shallows of the world».
Green: wood, is in the east and relates to spring. Green, the color of spring, is also the color of the world of plants.
White: metal, is in the west, with its season autumn with white as its color — a white with a blue tint. Incidentally, contrary to Western color-systems, black and white are part of the same circle in Chinese color-systems.
Yellow: earth. In the code of the five elements, the earth has a carrying, supporting function, and thus also assumes the function of primary source and nutrition: the plants sprout from the earth, from where fire, too, breaks out; metals are extracted from its mines, and water flows from its wells. The earth is the center — the color yellow; its taste is sweet, and its aroma is that of perfume. Mankind as the yellow race, the inhabitants of this world, stems from this equivalent.
.
The armored animals like the tortoise, which correspond to the north, water and the colour black, procreate the scaled animals like the dragon, which are always green, since these belong to wood and are located in the east. The scaled animals in turn create the fowls and poultry, to which the south and the colour red are ascribed. The feathered birds in turn create the fur-covered animals, such as the tiger or the horse, which are associated with the west, the metals and the colour white.
Water brings forth wood, and wood nourishes the fire. Fire (ash) fertilizes the earth, and the earth brings forth metals. Metal creates water.