Imagine the sky overarching the hills around Bethlehem, inky black when suddenly it became startlingly illuminated brighter than daylight: "An angel of the Lord appeared to the shepherds and the glory of the Lord shone over them and they became terribly afraid. The angel said to them, 'Don't be afraid! I am here with good news for you which will bring joy to all people...your Savior was born, Christ the Lord!' ...Suddenly a great army of heaven's angels appeared with the angel, singing praises to God." Luke 2: 8-13.

Into that black night, lucent light shone above the shepherds.
Afar, wisemen from the East kept their eyes on a silver star
guiding them across the golden sands to a humble stable in Bethlehem.
Upon yellow straw laid in a feeding trough lay a baby born to a young mother.
Renaissance artists painted her dressed in blue, the most precious color of their time.
The babe would have been wrapped in white swaddling clothes, those strips of cloth
even the poorest travelers carried in case of death along their way.
He was protected from cold with those fabric pieces. He was protected from Herod.
Those same artists would depict the glow that baby Jesus cast, some indicated a halo
to herald his holiness. His light filled the stable and crept out into our world. 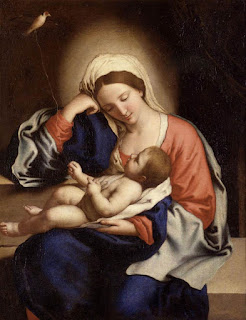 This beautiful painting of the Madonna and Child was produced by Sassoferrato (Giovanni Battista Salvi) who lived in Italy from 1609-1685. It is now in the collection at the Palazzo Ducale, in Urbino, Italy.