Today, it is simple to buy a colorwheel at Michael's or Hobby Lobby. Years ago, the study of color was laborious. The following article explains the history of this great tool for artists and craftspersons.

How many ways can you reshuffle the rainbow? Three, as a matter of fact, if modern color theory is to be believed: Pantone numbers for print designers and brand managers; hex, RGB, and CMYK values for web designers; and CIELAB and CIECAM02 color models for the scientific community. But while the science of color models is largely settled, all that rigorous theory still doesn’t quite squeeze out the sense of fallible humanity underpinning the history of the color wheel.
All it used to take was a load of brilliant chutzpah, a dogged sense of orderliness, and just a smidgen of actual science to impose your personal order over the color universe. This post and the next salute the color giants of centuries past and their often-fanciful, sometimes inaccurate, but always wildly rollicking wheels.

Slightly dotty in the science department but much-loved by generations of art historians and philosophers, Johann Wolfgang von Goethe's Theory of Colours coincided with this wheel (left) he designed in 1810. In the book, Goethe rebutted Newton’s color-spectrum theory by imagining darkness not just as absence of light but as its own active force. As light struck dark, in Goethe’s view, their battle threw off observable sparks of color.
During the week, Goethe devoted himself to such legend-building stuff as inventing the Italian tour, discovering the human intermaxillary bone, and giving voice to Sturm und Drang and Weltliteratur. But Goethe spent his weekends breathing on glass panes, prodding chocolate-froth bubbles, and flapping his arms in broad daylight, then jotting down how colors changed in each observation. The resulting catalog is an impressive confluence of exhaustive scientific inquiry and pointillistic word-art.
But Goethe had quite a few predecessors, some more wedded to the wheel-shape in quantifying color than others. (It’s an oddly Germanic list, too, these would-be color scientists.) In 1686, Richard Waller’s "Table of Physiological Colors Both Mixt and Simple" offered a handy table for cross-referencing colors one might find in nature samples. If a shade didn’t match exactly, Waller explained, it was a simple matter to locate where on the table’s color-continuum that shade might fall: 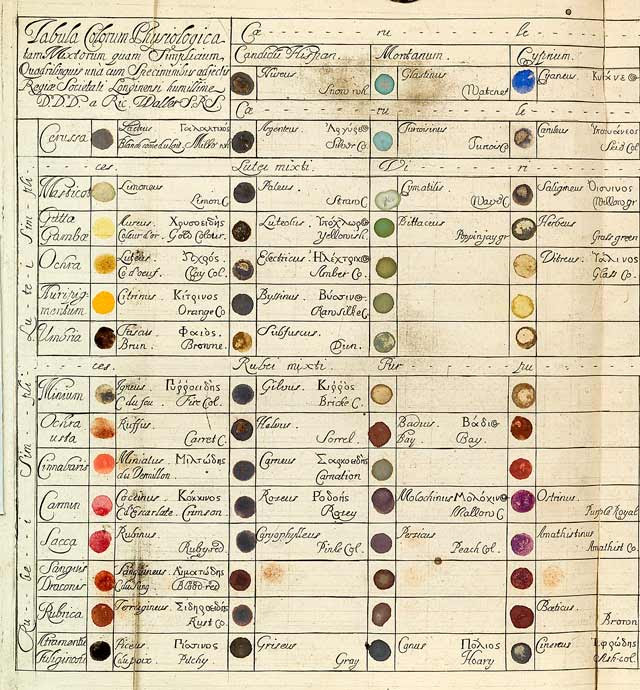 The table format, as is obvious to us today, had serious limits primarily because of the vast number of shades that fell between the divisions in color in any table. Even vast catalogues like the Pantone-esque Viennese Color Collection or Complete Book of Samples of all Natural, Basic, and Combined Colors, compiled by Johann Ferdinand Ritter von Schönfeld, in 1794, couldn’t catalogue every single color – and comprehensive catalogues also tended to be huge, unwieldy and expensive. 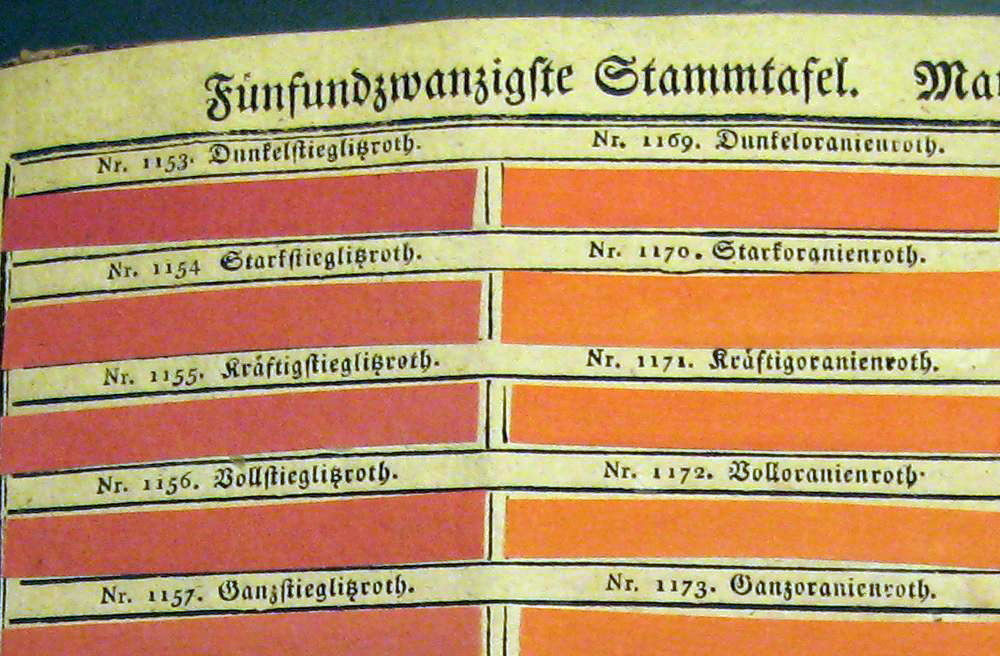 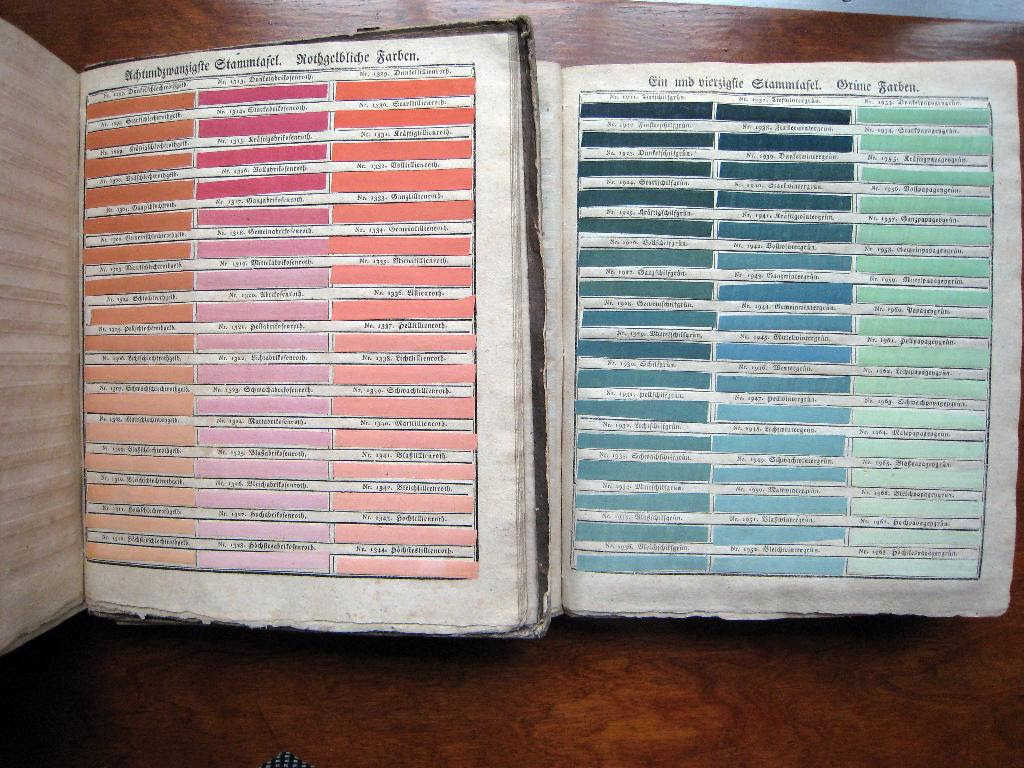 In 1769, Jacob Christian Schäffer – a naturalist, inventor and German Evangelical superintendent of Regensburg – tackled this natural limitation of the table format in his own color system. He gave blue, red, and yellow pride of place in his hierarchy, explaining how these primary colors could be combined to create a multitude of shades in between: 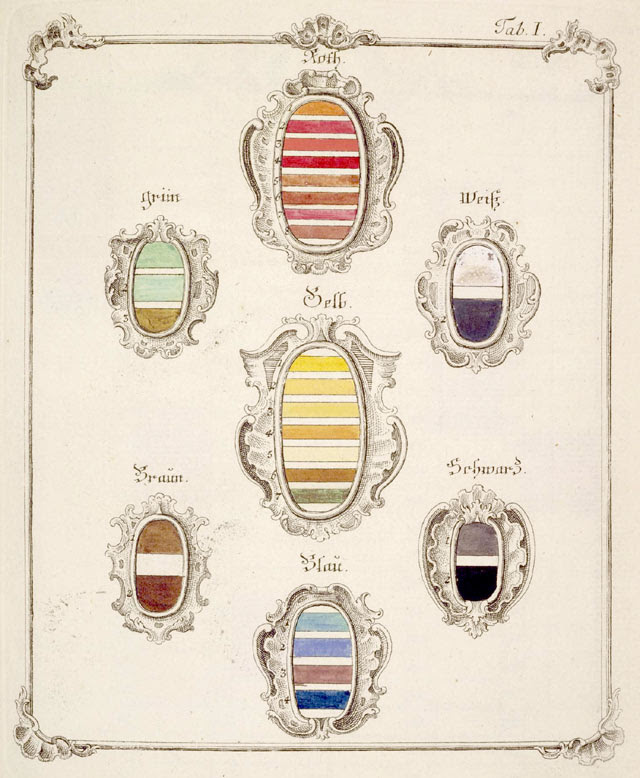 Photograph © 2002 Board of Trustees, National Gallery of Art, Washington, D.C. via The Creation of Color in Eighteenth Century Europe by Sarah Lowengard
No wonder color scientists hewed back towards color wheels and other means of suggesting an infinite color continuum. [Image via] Ignaz Schiffermüller was a Viennese butterfly expert whose 1775 color wheel was designed to help him accurately identify the colors he encountered in nature studies: 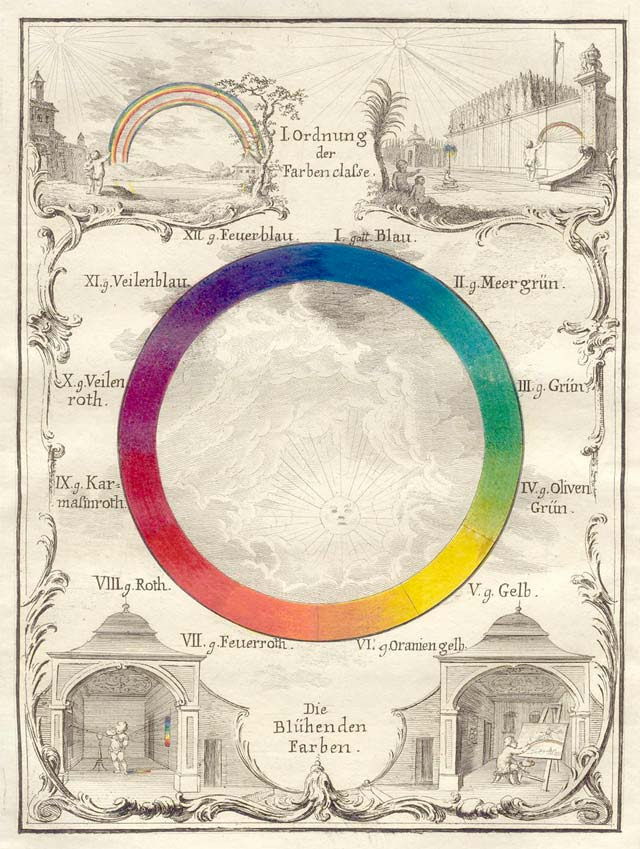 The color wheel above rolled hard on the heels of Moses Harris’ 1766 model from the Natural Systems of Colors. This particularly fine specimen was the British entomologist’s attempt to explain the color interplay he saw in his own favorite kind of bugs, flies: 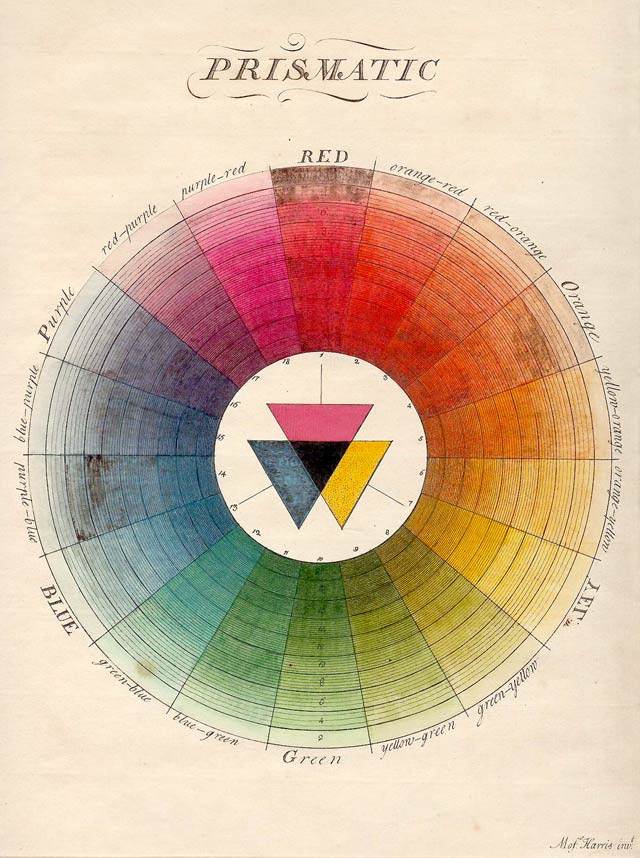 Although it would be some time before the color wheels concept finally took over, the notion of suggesting color relationships through smarter information design had taken root.
Go here for Part 2
[Thanks to Sarah Lowengard’s impressive project The Creation of Color in Eighteenth Century Europe and COLOURLovers’ concise summary of the project for great inspiration.]