Yes, This Still Life Really Is By Vincent Van Gogh

Image courtesy of AP.
The AP reports: "A new X-ray technique helped experts re-examine what they already knew about 'Still life with meadow flowers and roses' and draw on a growing pool of scholarly Van Gogh research."
After the Kroeller-Mueller Museum in the Netherlands bought the piece in the 1970s, experts posited that the vase was "too exuberant," and the signature (in the top right corner) was very unlike Van Gogh. So in 2003, the museum decided be safe and attribute the painting to an unknown artist. But on March 20, 2012, experts were finally able to verify that it was indeed by the Dutch master.


We should all be thrilled that new techniques of seeing behind surface paint to verify artists' works. Since this discovery coincides with van Gogh's birthday month, this is special. 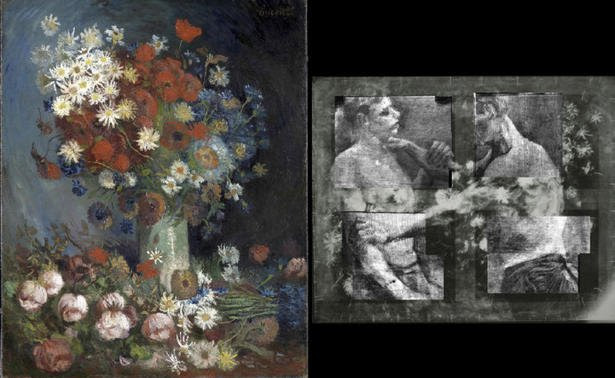 Vincent Van Gogh originally painted a canvas of two wrestlers and then painted Still Life With Meadows and Roses over it
Using a new X-ray technique, researchers examined the two wrestlers in more detail.
The brush strokes and pigments pointed to Vincent Van Gogh.
Researchers also discovered the large canvas was a standard format for figure paintings at the Antwerp academy where Van Gogh studied at the time.
A senior researcher at Amsterdam’s Van Gogh Museum, Louis van Tilborgh, took part in the study.
Louis van Tilborgh said the wrestlers posing half-naked in the original painting was characteristic of the Antwerp academy at the time.
Vincent Van Gogh also wrote to his brother saying that he was pleased with how the wrestler painting had turned out.
But Van Gogh later painted directly over it which experts say accounts for the “uncharacteristic exuberance” of the floral still life.


Like so many other "starving artists," Vincent reused a canvas with a scene of boxers which he evidently did not think worthy of keeping.