A Pioneer of Color 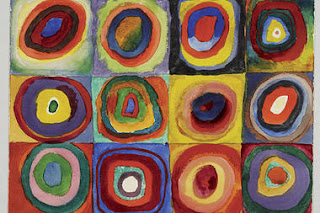 
Wassily Kandinsky was born December 16, 1866 in Russia. He was from a well to do family and began studying art seriously at age 30. He had strong feelings about the language color speaks. Yellow, he stated, was "like an intense trumpet blast, blue suggests a celestial sound that touches the depths and black is like the silence of the body after death, an absence of life."

The vibrant colors of peasants' houses near his home and Moscow's colorful churches especially awoke his color sensitivities. He felt color "sets all one's soul vibrating."

His painting pictured above was composed with water color, gouache and crayon. It has a large presence, yet is only 10 x 13 inches in size. In this piece, Kandinsky juxtaposed cool colors (blue, green and purple) that seem to recede against warm colors (red, orange and yellow) that appear to advance. That makes the colors seem to move and dance. To the artist, lines and shapes carried meaning. He saw squares as calm and triangles as aggressive. In this piece, he enclosed soft, curvy lines within hard, straight squares. Also, he used colors that "pop" beside those that ebb. The effect the artist captured is full of dynamic tension in this resonating work.

Kandinsky led an interesting life; he taught at the Bauhaus in Germany, influenced many other artists and was ahead of his time in many aspects. Much of his work was destroyed when Hitler labeled it unacceptable or "degenerate."

Kandinsky took his studies of color seriously; he looked into the technical aspects of it as well as its retinal effects. He was one of the first to write about the emotional aspects of color. His link of color and music was very innovative.

I hope my introduction of this influential painter will encourage you to dig deeper into his art and life.