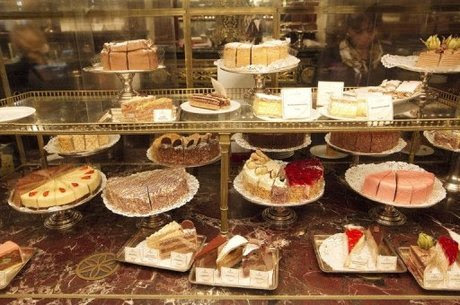 British hospitals use red trays in a program to combat malnutrition, but may have chosen the worst possible color, according to a study Wednesday linking the tinge of tableware to food enjoyment.
Researchers from the University of Oxford contributed data to the growing body of evidence that the color, size, weight and shape of eating utensils, cups and plates have a big influence on what people taste.
Their findings on cutlery tally with previous research for crockery colors, including the discovery that red tends to limit food intake, they said.
"Red could... be used to serve food to people who need to reduce their food intake, but should certainly not be used for those who are underweight," the team wrote in the journal Flavor.
British hospitals use red trays to make it easier for nurses to identify people who need help eating.
"Red appears to be the worst possible tray color... for those individuals who are being encouraged to eat more," the researchers warned.
In a series of experiments, the team used utensils of different colors, shapes and weight to gauge the impact on the perceived taste of the same food among dozens of volunteers with normal vision.
Among other things, they found food eaten from a knife tasted saltier than eaten with a spoon, fork or toothpick, and "more expensive" when eaten with lightweight plastic spoon.
Such outcomes may be explained by the role of advertising and packaging or an individual's personal associations with certain colours, said the team.
"How we experience food is a multisensory experience involving taste, feel of the food in our mouths, aroma, and the feasting of our eyes," the authors wrote in a statement.
"Even before we put food into our mouths our brains have made a judgement about it, which affects our overall experience."
Such knowledge could be used to subtly influence the eating patterns of people who ingest too much or not enough, said the authors.
In January this year, researchers at the Polytechnic University of Valencia and the University of Oxford said a group of volunteers had rated hot chocolate tastier when served in orange- or cream-colored mugs, compared to white or red.
Previous research had found that yellow containers boost the perception of lemon flavour in soft drinks; beverages with cold colors, like blue, seem more thirst-quenching than warm colors like red; and pink drinks are perceived as more sugary.
SourceAgence France Presse
Posted by ColorFilled at 10:37 AM