Pink As A Symbol

Rose pulls for family, future, and faith atop her 1953 pink Farmall tractor for a reason. 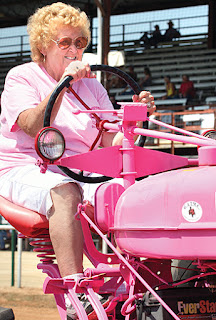 "Rose Goltz's tractor is so pink, it makes flamingos look pale. The Grandview, Texas, resident is outstanding in her field since her vividly hued 1953 Farmall tractor is both an eye-catcher and the reason she is the reigning 2011 points champion in the 6000 pound class of tractor pulling competitions.

She sat rather conspicuously surrounded by other contestants who steer famously-green John Deeres and red-shaded Farmalls in the pulling competition at the in the 27th Annual Antique Machinery Show at the Gillespie County Fairgrounds track in Fredericksburg, Texas, recently.

When asked why her tractor is painted such a bright pink, she explains that since the big 'C' has claimed most of her family at young ages, she thought it would be the best way to promote awareness in the fight for the cure and for courage to those facing their battles with cancer.

'I wanted my tractor pink because of my feelings related to cancer. God has been good to me and my kids and I thought if I can do something to give back to Him, I would do it.'

Three years ago, Goltz said she never dreamed of being a competitive driver nor did she  think anyone could persuade her to get up on a tractor. 'But this beauty came in out of a field and became at home with me in a parts trade with a well-known tractor restorer/competitor in the tractor-pulling circuit.'

Rose finally got up the courage to do a pull after the crowd had gone home for the day. She discoved a new passion never dreamed of previously.

She went on to defeat many who had been in the sport for years. 'Then, after I won everything last year, I wanted to paint my tractor pink. Not just any shade would do. I sent off for the official shade of breast cancer pink and a friend donated his time to paint it in January.'

Accents painted on the tractor include red roses to symbolize her name and a line that reads "Pulling for Jesus." 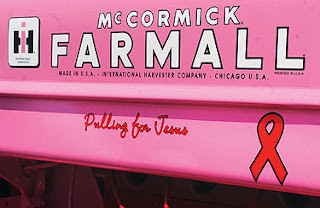 At the wheel, Goltz has taken her pink machine to several public venues including volunteer fire department functions and community parades.

'Everyone's read proud of it being pink. Everywhere I go, they give me a standing ovation,' she said.' "

Thank you to Lisa Treiber-Walter, author of this article from the Fredericksburg Standard Radio Post, June 13, 2012. I cannot think of a better way to use the color pink. BLoyd

Posted by ColorFilled at 5:46 PM