We thought we’d give a nod to the women who attended to the appearance of middle- and upper-class ladies throughout the ages – the lady’s maid. Employed by the lady of the house, the lady’s maid was a female personal attendant whose specific duties included helping her mistress with her appearance (including makeup, hairdressing, jewelry, clothing and shoes) and keeping her rooms in good order.
Lower-class and poorer women would not have had the means to hire staff. They would have dealt with all aspects of their appearance and the running of the household themselves.


The mistress would usually refer to her lady’s maid using her surname, but all the servants of the household would call the lady’s maid “Miss”. The lady’s maid would refer to her mistress as “Milady”.The lady’s maid was a personal servant employed by the mistress of the house. She would report directly to, and only to, her mistress.
It was a paid position, one that came with perks, and was a more senior/head servant position, like the housekeeper, butler or head gardener – an “above stairs” position that was looked upon with relative respect. No uniform was worn (unlike the lower servants), but simple, clean and neat attire was expected.
As well as receiving a wage, the lady’s maid would also have her own room, full board, accompany her mistress on any travels (both at home and overseas), and receive her mistress’s cast off clothes to do with as they pleased (e.g. sell or wear).
A good lady’s maid was cheerful, honest, discrete, organised and obedient. She had to possess many skills, including a good standard of reading and writing, hairdressing, dressmaking, needlework, millinery and cosmetic knowledge.
The lady’s maid was the female equivalent of the valet – the manservant to the gentleman of the house. A royal household, or one with substantial wealth, would have employed the services of several personal attendants.

General Duties of a Lady’s Maid 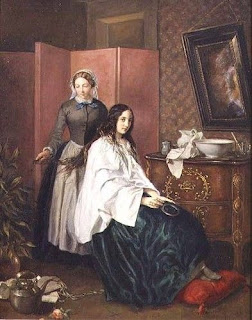 “Combing My Lady’s Tresses” by Jean-Baptiste Antoine Emile Béranger (1814-1883)
One of the most important parts of the lady’s maid’s duties would be the washing, brushing, trimming and styling of her mistress’s hair.
Though rich women could employ the regular services of a hairdresser, the lady’s maid would be expected to be proficient in hairdressing between appointments. Training may be provided for those who needed it, or the lady’s maid could organize lessons for herself, and keeping up with the latest hair fashions was important.
Hair fashion was extremely important for the mistress of the house, and her hairstyle could be changed several times during the day, from an appropriate morning or day styles to something more elaborate for evening functions.
The lady’s maid would also keep the brushes and combs clean, using appropriate cleaning methods to ensure the items were not damaged in the process. Until plastics became more commonplace in the early 20th century, hair accessories and dressing items would be made from various materials, including bone, tortoiseshell, metal, horn, leather and wood – all of which needed careful handling. Often, the maid would save the mistresses hair taken from brushes in a special container. Later, these could be made into "rats" or "squirrels" to boost fullness of styles worn for special occassions.
Any false hair or “transformations” (wigs) that were used (be they in fashion or used more discretely) would also be under the care of the lady’s maid. Imagine the inventory of Queen Marie Antoinette's ornate wigs.
For more informaton, see The Book of Household Management (1861) by Mrs Beeton on the duties of a Victorian lady’s maid

As with hairdressing, the lady’s maid would deal with all aspects of preparing her mistress’s toilet, including drawing a bath and organizing hot water for washing.
She would make or procure all the cosmetics required by her mistress. She would deal with the perfumers and suppliers, and would have recipes for making hair washes and pomades. 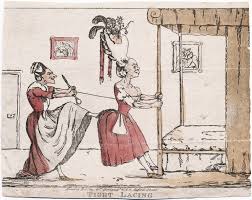 She would maintain her mistress’s entire wardrobe, everything from dresses and shoes to undergarments, hats, and gloves. This would include removing stains, brushing off any dirt, ironing, darning, mending and altering garments as needed. She would need to know how to deal with different materials and jewelry, and how to wash fine linens, silks and lace.She would lay out the clothing and accessories required during the day for the all activities taking place (e.g. riding, walking, hunting, driving, any evening events, and nightwear).
The lady’s maid may also have made dresses for her mistress, procuring all materials with the suppliers. Keeping abreast of the latest fashions and accessories would be advisable. 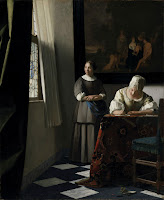 “Mistress and Maid” by Johannes Vermeer. https://commons.wikimedia.org/w/index.php?curid=464760
The lady’s maid would keep her mistress’s personal rooms and possessions in good order, keeping things clean, and tidying away any items left out by the mistress.
The lady’s maid would also keep a list of items that needed replacing or purchasing, pack for any overnight journeys, empty the chamber pot and bring her mistress breakfast in her room.
Other tasks would include attending to fresh flowers, candles and lamps. Attending to the mistress’s pets, such as walking dogs, would also fall to the lady’s maid.
Other household duties such as preparing meals, fire lighting and general laundry may be performed by other servants, should the household have the means to employ a larger staff. If so, the lady’s maid would oversee the tasks to ensure they are carried out proficiently, though she was not in charge of those servants.

The lady’s maid was independent of the other servants – reporting solely to her mistress. 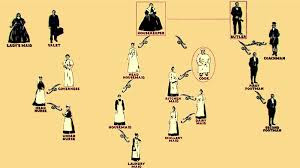 The Countess of Airlie, the lady-in-waiting of Queen Mary
A lady-in-waiting was a personal female assistant at a court (royal or feudal), attending on a queen, princess or other high-ranking noblewoman.
Whether she received monetary compensation for her services or not, the lady-in-waiting was considered to be more of a companion to her mistress, rather than as a servant, and was often a noblewoman herself, from a “good family”, but of a lower social standing than her mistress.
It was a prestigious position to be at court attending to royalty, and often afforded the lady-in-waiting privileges and enhanced marriage prospects.
Ladies-in-waiting did not perform menial tasks – these were carried out by servants. Duties varied from court to court, and the requirements of the individual mistress, but generally a lady-in-waiting would need to be proficient in a wide range of skills, including:
Quite a variety of skills and personal attributes needed!
A woman may have been able to select her own ladies; however, even when she seemingly had free choice, her choices were usually heavily influenced by those around her, including her husband, parents, and even the king (or his ministers).
Notable ladies-in-waiting include Anne Boleyn (to Queen Katherine of Aragon), Jane Seymour (to Queen Anne Boleyn), and Catherine Howard (to Anne of Cleves) – all of whom became Queen Consort to Henry VIII.

A lady’s companion was similar to a lady-in-waiting, but it was always a paid position and was considered higher in status than the lady’s maid.
The woman employed as a companion would be a woman of high social standing (similar to that of her mistress), who needed the financial benefits of a paying position.
A lady’s companion was not regarded as a servant, and lived in the family’s quarters (rather than with the servants).
Until around the mid-20th century, many upper- and middle-class women spent a lot of time at home, so a lady’s companion was employed to provide conversation and company, as well as help entertaining guests and give directions to servants, just as the lady of the house would.
The lady’s companion has become obsolete in most developed countries, as women no longer spend their day at home. Also, the work opportunities that emerged for women during both world wars gave them far more employment choices.

Maids of honor were junior, and often younger, attendants of a queen in royal households, especially those of England and later of the United Kingdom. A maid of honor would be a maiden (i.e. unmarried) and the role was in preparation of eventually being a lady-in-waiting.
Posted by ColorFilled at 9:33 AM