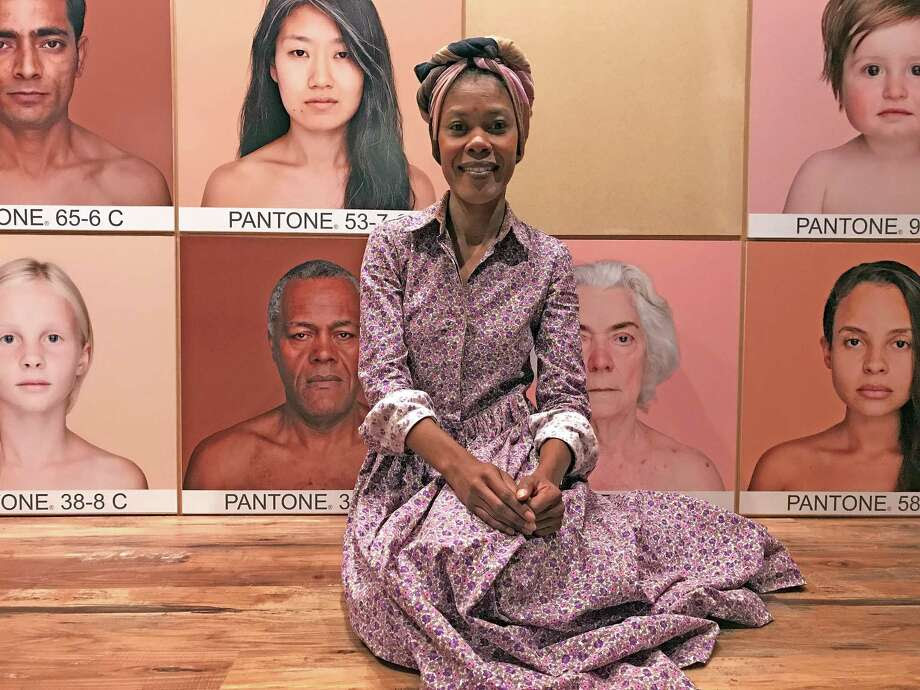 Photo: Molly Glentzer, Houston Chronicle
Angelica Dass, a Brazilian artist who lives in Spain, poses at the entrance to her exhibition "Humanae," on view at the Health Museum through Sept. 5.
The piece: "Humanae"
The artist: Angelica Dass
Where: The Health Museum, Houston, Texas, through Sept. 5
Why: What looks like a playground of photographic building blocks turns out to be
a thoughtful exercise in illustrating the beauty of human diversity.
The chromatic scale of more than 1,800 "spot" colors produced by Pantone have
long been used by people who are picky about getting gradations of color perfect.
The fashion design industry names a "Pantone color of the year" annually that
drives trends across home design, as well.
But Brazilian activist and artist Angelica Dass has used a Pantone palette to create
more than 4,000 portraits across 17 countries and 26 cities to illustrate that there's
no such thing as black and white in the human race. Everyone falls somewhere in
the warm, earth-toned browns, creams and pinks.
The Health Museum's installation from her ongoing "Humanae" project fills one
gallery with a playground-inspired stack of wooden cubes containing 250 portraits,
representing the scope of colors she has encountered and all the cities she has
visited.
Dass photographs each volunteer subject in even light, with bare shoulders, then
matches an 11-pixel-by-11-pixel spot from the middle of their noses to a Pantone
color and drops the portrait into a block of that color.

To read this article in one of Houston's most-spoken languages, click on the button below.

Get Gray Matters sent to your inbox. Sign up now!

Only two faces are a constant in her installations: Her father's, which is brown, and her grandmother's, which has a pinkish glow.
Dass launched "Humanae" about five years ago, thinking about the color of her family. She started with portraits of herself and her husband, a blonde Spaniard.
"As you can see, I am brown with curly hair. But I'm very brown to be white. Because I am white, too," she said. "And I'm very brown to be a native Brazilian. I'm very proud to be who I am." (For the record, she's Pantone 75-22 c.)
Growing up in Rio de Janeiro, Dass always felt the frustration of pinkish Crayolas labeled "flesh" or "skin." When she was older, taking a cousin to a fancy French school, people treated her as if she must have been a nanny or servant.
Brazil's long history of black slavery did not end until 1888. "The ones who were the slaves in the 1890s continued to be servants in the 1900s," she said. "Now people like me who have jumped a level in society have an opportunity to talk about it." Her father was an engineer; her mother, a teacher.
Dass attended art school to become a costume and set designer, then moved to Madrid 12 years ago and earned a graduate degree in photography.
"Humanae" crosses the boundaries between art and activism. With each city she visits, Dass usually sets up a studio to keep adding to the portraits. And her residencies often include community workshops. (At a city on the border of Switzerland and Italy where many refugees pass through, her temporary studio offered classes in Italian as part of its programming.)
Museum settings are fine and important, but she's happiest when "Humanae" gets staged outdoors. It has taken many forms, even covering the sides of buildings. "I really want, through these photos, to make noise in the streets," she said.
Posted by ColorFilled at 7:35 AM