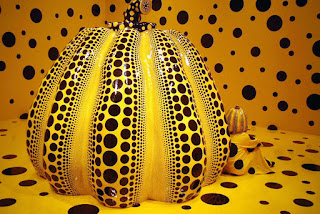 HAPPY HALLOWEEN! The pumpkins shown below are spectacular, unique versions by a fascinating artist, Yayoi Kusama. Pumpkins are an important motif in Yayoi Kusama’s work, a fascination that extends from the artist’s youth during the years of World War Two. While Japan’s food supplies were generally disrupted, Kusama’s hometown of Matsumoto was relatively untouched by the conflict and local produce was in abundance. The family business was in wholesaling, and the Kusama storehouse was always full of pumpkins. Despite having consumed the vegetable to the point of nausea at the time, Kusama has maintained an attachment to its irregular, bulbous form.
Pumpkins first appeared in paintings and drawings executed during her studies of nihonga (traditional Japanese painting) at Kyoto Municipal School of Arts and Crafts. Their unpredictable, organic shapes are reminiscent of the automatic drawing technique of late Surrealism, the influence of which can be found in Kusama’s early work, and indeed across much Japanese avant-garde art of the early 1950s. Pumpkins would find renewed importance in Kusama’s practice as it expanded in scale in the 1980s and 1990s. Notable examples include her installation Mirror Room (Pumpkin) 1991, which simulated a vast field of the gourds, and was a component of her showing at the 1993 Venice Biennale; as well as giant outdoor sculptures, commissioned for Naoshima Island in Japan’s inland sea and for the Fukuoka Prefectural Museum of Art in 1994.
The significance of pumpkins to Kusama’s later work lies in the artist’s use of themes and motifs from her childhood. Formally, they are consistent with the blending of the manufactured and the organic in her sculptural work, while their random, almost mutant, appearance highlights the degree to which the natural world appears as strange and uncanny in modern culture. At the same time, they bear connotations of growth and fertility, and the sense that when a pumpkin swells to abnormal size it is a thing of wonder, a gift of the earth able to feed whole communities.
Her ‘Reach Up to the Universe, Dotted Pumpkin’ works appear as aluminium sculptures within a mirror installation, a technique Kusama pioneered in the early 1960s to solve the problem of how to visually represent the concepts of repetition, accumulation and infinity, concepts which are so important to her work. On one hand, Kusama’s mirror rooms open her self-contained, self-focused practice up to the world; on the other, they draw the world into the work. Here, this game of dualities is played out in a room with alternating black and orange walls, dotted with convex mirrors that replicate the gleaming, perforated exteriors and monochromatic interiors of the two over sized aluminium pumpkins.

Posted by ColorFilled at 1:50 PM