Francisco de Paula Juan Nepamunceno Maria de los Remedios Cipriano de la Santisima Trinidad Martyr Patricio Clito Ruez y Picasso was born October 25, 1881. When he was born the midwife thought he was stillborn and left him on a table while she began to attend to his mother. His uncle saved his life by blowing smoke into his face. Tiny Pablo "grimaced and created a bellow of fury."

Picasso, was singular in the art world. Not only did he manage to become universally famous in his own lifetime, he was the first artist to successfully use mass media to further his name (and business empire). He also inspired or, in the notable case of Cubism, invented, nearly every art movement in the twentieth century.
Movement, Style, School or Period:
Several, but best known for (co-)inventing Cubism
Date and Place of Birth:
October 25, 1881, Málaga, Spain
Early Life:
Picasso's father, fortuitously, was an art teacher who quickly realized he had a boy genius on his hands and taught his son everything he knew. At the tender age of 14, Picasso passed the entrance exam to the Barcelona School of Fine Arts - in just one day. By the early 1900s, Picasso had moved to Paris, the "capital of the arts" and found friends in Henri Matisse, Joan Miró and George Braque, and a burgeoning reputation as a painter of note.
Body of Work:Before, and shortly after, moving to Paris, Picasso's painting was in its "Blue Period" (1900-1904), 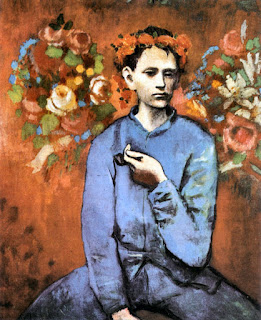 It wasn't until 1907, though, that Picasso really raised a commotion in the art world. His painting Les Demoiselles d'Avignon marked the beginning of Cubism. 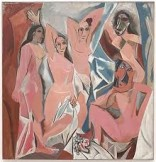 Having caused such a stir, Picasso spent the next fifteen years seeing what, exactly, could be done with Cubism (such as putting paper and bits of string in a painting, thus inventing the collage). The Three Musicians (1921), pretty much summed up Cubism for Picasso. 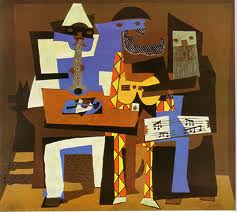 For the rest of his days, no one style could maintain a hold on Picasso. In fact, he was known to use two or more different styles, side by side, within a single painting. One notable exception is his Surrealistic painting Guernica (1937), arguably one of the greatest pieces of social protest ever created.

Picasso lived long and, indeed, prospered. He grew fabulously wealthy from his phenomenal output (including erotically themed ceramics), took up with younger and younger women, entertained the world with his outspoken remarks, and painted almost right up until he died at the age of 91.
Date and Place of Death:
April 8, 1973, Mougins, France
Posted by ColorFilled at 1:44 PM