Can Color Get You What You Want?


Gina Gadston from Houston had an interesting column regarding getting what you want via color. She interviewed  Shah for the information. I am not sure of Shah's credentials, whether color psychologist or a political advisor. Let me know if you found success trying any of her suggestions. The one about car sales got my attention.

"A successful image visually communicates your message," Shah said.
Shah says the key is to wear the right color at the right time.
"Color can activate different emotions and behaviors in people," she said.
For example, during the first presidential debate, President Barrack Obama wore a navy blue suit with a blue and white tie.
"The color blue communicates steadiness, dependability, trustworthiness," Shah said.
Shah believes it was meant to convey a message of "trust me" and "stay with me for another term."
Gov. Mitt Romney went with a red tie.
"Red physically increases the heart rate and increases respiration," Shah said.
Shah says red may have been meant to depict Romney's competitive spirit, and a message that he's ready to fight for the new job.
So how can you use color to your advantage in everyday situations?
With job interviews, Shah says a good choice is orange.
"Orange can really help you by helping your interviewer see you as part of the team already," she said.
The color orange symbolizes unity and bringing people together.
When it comes to making a big purchase, going green could help in your negotiations.
"If you're out buying a car, chances are if you're wearing green, the business deal is going to go smoother, and it's going to go in your favor," Shah said.
Shah says green brings harmony between both negotiating parties and could help you get what you want.
Want to impress a first date? Pull out something red!
"It will make you feel more romantic. It will increase your appetite. So it's really a great color to bring two people together," Shah said.


Joan Crawford ready for her wedding in the movie, The Bride Wore Red. 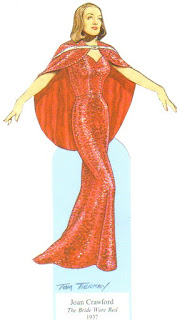 And when it's time to meet the parents, blue is best.
"'Cause you're going to seem more trustworthy, more safe. And this is what you want your girlfriend's parents to feel about you," Shah said.
So before you leave the house in the morning, think about what you're wearing. The colors could help to make or break your day."
Posted by ColorFilled at 11:41 AM