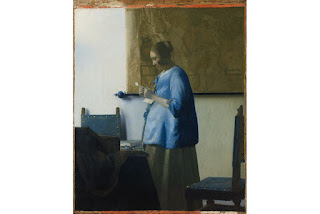 AMSTERDAM.- During the meticulous restoration of Woman in Blue Reading a Letter (1663-64), one of the Rijksmuseum’s four Vermeer masterpieces, a number of surprising details were uncovered. Vermeer’s characteristically intense use of blue, for example, can now be viewed in all of its magnificent nuances for the first time in centuries. In addition, several pearls that were added in 1928 were removed, and other details that had disappeared were restored.

This masterpiece has undergone all kinds of treatments over the centuries that left their mark on the painting. Under the supervision of an international committee of experts, Rijksmuseum restorer Ige Verslype has restored the painting to its original condition wherever possible. Woman in Blue Reading a Letter will be on display in a special exhibition in the Rijksmuseum.

Ige Verslype: ‘The greatest surprise was when we discovered how Vermeer produced such an intense blue colour. We now know that he used a copper-green undercoat to give the colour extra depth. Once the yellowed glaze had been removed, this magnificent blue came back into view in all of its glorious nuances.’

The restoration
The different stages in the restoration process are presented as part of the exhibition of Vermeer’s Woman in Blue Reading a Letter, and various examination techniques, such as infrared reflectography and X-ray fluorescence scanning, are also shown. In addition, the exhibition reveals striking details of the painting that had been painted over, such as the little nails in the upholstery on the side of the chair. The restoration process took more than a year to complete.

In the frame
During its 170 years as part of the Rijksmuseum’s collection, Woman in Blue Reading a Letter has had a total of four different frames. The four frames are on display in the exhibition, so visitors will be able to see the effect of each frame on the painting. The exhibition also shows how the choice of frame is very much affected by fashion at the time. The painting was placed in its current French gilded frame in 1925.

The exhibition
Once the restoration was complete, the painting was transported to Japan where it went on display in an exhibition entitled Visualizing human connection in the age of Vermeer in Kyoto, Sendai and Tokyo. The painting can be admired in the Rijksmuseum at this moment.
The Girl with the Pearl Earring, both the movie and the book, were authentic to the period of Vermeer's time. My favorite part of the book was the description of the paints being ground for his works. Now, we buy tubes of paint so easily. Reading about the price of paints in the 1700's, and their scarcity in some instances, makes me thank God for tube paints' easy access in our day.

Posted by ColorFilled at 2:56 PM