How our brains and eyes work together to perceive colors is, to me, a miracle designed by God. The following article sheds light on how differently we perceive color. Emotional associations color our perceptions as well. BBL
triot-News 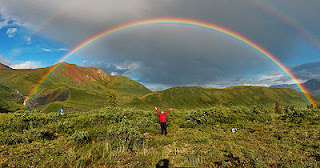 "You remember your mother often wore a red dress; you loved it when she swung you around in her arms and the skirt of her dress twirled around as you danced together.
I remember the night our neighbor’s house caught fire and the big red fire trucks screamed onto our road, piercing the silent night with an air of alarm that made me tremble.
Today, when you and I see a red stop sign, we might see its color differently, believe it or not.

“When I see red in my adult life, not only will my perception of hue tie to that early memory, but I will also have a pleasant feeling associated with it,” said Dr. Richard Paczynski, a neurologist.  “If your first experience of the color red was fire trucks and you had an intense emotional response to it, then seeing red may trigger many different emotional responses in you as an adult.”

The subtleties of color perception are influenced by a part of our brain called the association cortex, which integrates visual information with associated memory and past experience, he said.
If you really stop to think about it, colors don’t exist in a concrete way, so no one really knows what someone else is seeing.

Why we see the colors we see can be a fascinating subject to doctors, artists and the rest of us.
The process of how we see color from a physiological standpoint is pretty standard: Light reflects off a surface, passes through the lens and impacts on the back of the eye, which is lined with a matrix of millions of cells called the retina. There are two kinds of light-sensitive cells in the retina — rods and cones. Cones are primarily responsible for color and they convert light energy into nerve impulses sent to the visual cortex of the brain via the optic nerve.
Paczynski explained. “One of the reasons for so much individual variation and subjectivity in color perception is that seeing color involves not just the eye or the primary visual cortex, but the cross-connections with other cortical areas and also with the brain’s memory centers.”
So why one person sees pink and another calls it salmon reflects both physiological differences and differences in association — both emotional and intellectual, Paczynski said.

“Green is a composite of blue and yellow. I may look at a green object and see more blue and you may see more yellow and that’s because in some people, the blue portion of the signal may be amplified and the yellow portion suppressed, or vice versa,” he added.
Physiologically speaking, differences in color perception could be due to cone cells in the retina that are misaligned or that don’t have the same absorption curve so that the mix of colors is off, said Dr. Erik Chotiner, an ophthalmologist.

Functional imaging with MRI has given doctors concrete proof that there are enormous differences in the number and precise location of brain cells activated when two people look at the same object — which means that neurologically there are dramatic differences in the way we see color, Paczynski said. 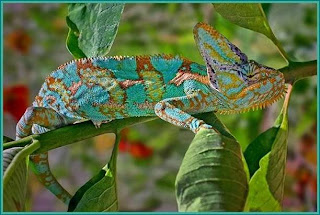 Color blindness — a deficiency in the way we see color — has much more to do with genetic differences in the chemical composition of the cone cells.
“We know there are at least four different genetic causations that account for differences in color perception; some are faulty genes and some are normal genes that produce too much normal protein that changes the functioning of the cone,” Paczynski said.
The term “color blind” is actually a misnomer because these people can see colors, just not the way others do, Chotiner said. There are three types of cones — red, green and blue — that must function properly for normal vision, he said.
The most common form of color blindness is dyschromatopsia, which affects about 8 percent of men and 1 percent of women. Most often, people can’t distinguish between red and green.

It is possible to have acquired color blindness after damage to areas of the brain where color processing takes place, such as a stroke, tumor or brain hemorrhage, Paczynski said.
This is common, and doctors often refer to it as “color agnosia,” a term that emphasizes how people fail to recognize colors, even though they have normally functioning eyes. The problem has to do with those associations, he said.
“Cataracts can also cause temporary color blindness,” Chotiner said. “One of the universal comments I get after cataract surgery is, ‘Wow, colors are so bright again!’”
Achromatopsia refers to the inability to see colors at all. This is a rare, hereditary condition that affects only about 1 in 30,000 people, doctors said.

-- Written by CAROLYN KIMMEL For The Patriot-News
Posted by ColorFilled at 8:44 AM