Kissing under the Mistletoe has been a custom I've observed for many years around Christmastime. I never knew until recently that the custom began with the druids in northern Europe.

"They believed mistletoe had curative powers and could heal lots of things, including separation between people. So when two enemies happened to meet under an oak tree with mistletoe hanging above them, they took it as a sign from God that they should drop their weapons and be reconciled. They would set aside their animosities and embrace each other under the mistletoe." This excerpt is from Christmas Gifts That Won't Break: An Advent Study for Adults by James W. Moore. 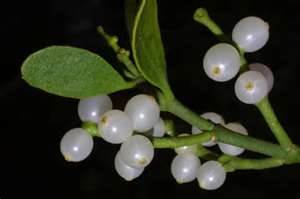 Another legend about mistletoe involves color.
"In pre-scientific Europe it was believed that mistletoe plants burst forth -- as if by magic -- from the excrement of the "mistel" (or "missel") thrush. According to Sara Williams at the University of Saskatchewan Extension, "It was observed in ancient times that mistletoe would often appear on a branch or twig where birds had left droppings. 'Mistel' is the Anglo-Saxon word for 'dung,' and 'tan' is the word for 'twig'. So, mistletoe means 'dung-on-a-twig'." Not exactly a word origin in keeping with the romantic reputation of mistletoe plants!

While belief in spontaneous generation has long been discredited, the word origin of "mistletoe" is not as fanciful as one might at first think. "By the sixteenth century," says Williams, "botanists had discovered that the mistletoe plant was spread by seeds which had passed through the digestive tract of birds." And folks had known for some time that the berry of mistletoe plants is a favorite treat of the mistel thrush. So while their reasoning was somewhat askew, the old-timers were justified, after all, in naming mistletoe plants after the bird most responsible for its dissemination.

As might be expected from a plant that has held people's fascination for so long, mistletoe plant has also carved out a niche of fame for itself in literary annals. Two of the better-known books of the Western tradition feature a particular mistletoe shrub prominently -- a mistletoe shrub given the pseudonym of "golden bough." And herein lies yet another twist in the tale of this remarkable plant.

In Virgil's Aeneid, perhaps the most famous book in classical Latin literature and one of the most famous poems of all time, the Roman hero, Aeneas, makes use of this "golden bough" at a critical juncture of the book. The "golden bough" was to be found on a special tree in the grove sacred to Diana, at Nemi; a tree containing a mistletoe plant. The prophetess Sibyl instructed Aeneas to pluck this magic bough before attempting his descent into the underworld. Sibyl knew that, with the aid of such magic, Aeneas would be able to undertake the perilous venture with confidence. Two doves guide Aeneas to the grove and alight upon the tree, "from which shone a flickering gleam of gold. As in the woods in the cold winter the mistletoe -- which puts out seed foreign to its tree -- stays green with fresh leaves and twines its yellow fruit about the boles; so the leafy gold seemed upon the shady oak, so this gold rustled in the gentle breeze." (Aeneid VI, 204-209).

The title of Sir James G. Frazer's anthropological classic, "The Golden Bough" (1922), derives from this very scene in Virgil's Aeneid. But just how, you might be asking, can something green like mistletoe plants become associated with the color gold? According to Frazer, mistletoe could become a "golden bough" because when the plants die and wither (even evergreens eventually die, of course), mistletoe plants acquire a golden hue. Fair enough. But once again, botany and folklore most likely must be mingled to arrive at the full explanation.

The perception of goldenness in the dried leaves of mistletoe plants was probably influenced by the fact that, in the folklore of Europe, it was thought that mistletoe plants in some cases are brought to earth when lightning strikes a tree in a blaze of gold. And a fitting arrival it would be, after all, for a plant whose home is half way between the heavens and the earth."

Enjoy those kisses under the mistletoe, just don't eat the berries because they are poisonous!

Posted by ColorFilled at 5:52 PM