A Fish of a Different Color

During our residency in Tulsa, Oklahoma, many koi ponds decorated back yards from modest houses to the palatial Philbrook mansion. Collecting fish as a hobby has a long history. Color plays a role. 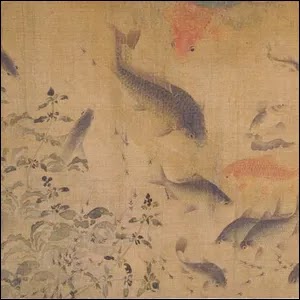 Modern goldfish, staples of aquariums and ornamental ponds across the world, are the descendants of small carp domesticated in ancient China thousands of years ago. The original fish were a silver color with the occasional mutation yielding a more colorful variation in red, orange, or yellow. The first such mutations were recorded during the Jin Dynasty over fifteen centuries ago.
It wasn’t until the Tang Dynasty, around 618 – 907, however, that the keeping of carp in ornamental ponds became popular. It was also around this time that people began isolating the fish with unique gold coloration to further breed them in hopes of producing more distinct coloration.
Even with the initial interest in the Tang Dynasty, there weren’t many truly golden fish; it wasn’t until the Song Dynasty in the 12th century that the goldfish really came into its own. Starting in 1162, the empress of the Song Dynasty ordered the construction of an enormous pond specifically for the purpose of breeding red and gold variants. From there, the practice of breeding and keeping goldfish became enmeshed and by the 17th century goldfish had even spread to Europe.

Color stands out in the murky water of ponds, no wonder the vivid colors of fish became so popular. 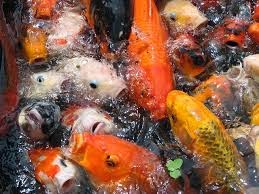 Posted by ColorFilled at 2:14 PM