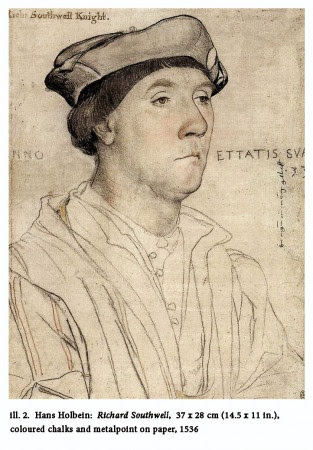 Hans Holbein the Younger (1497–1543) was the greatest (although not the highest paid) portrait painter at the court of King Henry VIII.
He first moved to England from his native Germany in 1526, and came under the patronage of Sir Thomas More. More was a devout Catholic, which was awkward for Holbein, who had Protestant leanings due to the new and dangerous Lutheran ideas that were growing in Germany.
Nonetheless, no friction grew between Holbein and More during the two years of this, Holbein’s first stay in England. Returning to his wife and children in Basel in 1528, Holbein bought two houses, using some of the money he had earned from his very successful portrait business.
In 1532, he again left his family and moved back to England, this time under the patronage of Anne Boleyn and Thomas Cromwell, who introduced Holbein into Henry VIII’s court. There, he painted some of the most brilliant and influential portraits in the history of art.

Holbein’s method of working was to set up a viewing apparatus and trace the outlines of his sitter’s face, using a device similar to the one drawn by Albrecht Dürer, a German artist who was a generation older than Holbein. 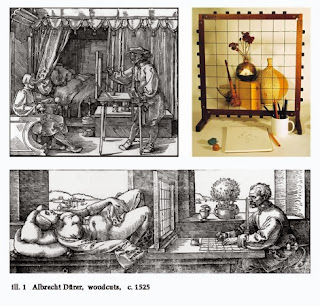 Holbein would then lightly model the traced face with pencil and/or colored chalks, but leave the clothing as the simple outlines. (See first illustration above of Richard Southwell)
He then took this tracing, as well as some written color notes, back to his studio and painted the portrait from these. (Imagine how little time his subjects had to "pose.")  Recent examination of Holbein’s portraits has shown that he used some combination of egg tempera and oils as his painting medium, but it is not clear whether these two were combined in an emulsion, or painted consecutively.
Artists work with compositional systems: a poet might work within the Petrarchan sonnet form, the French ballade, or the sistina (among many others), and a musician might work in the sonata form, or in one of the several cyclical forms. With regard to color, a painter first decides on a value composition and follows this with a hue scheme.
Color has three aspects: hue, value, and chroma. Hue is what we generally mean when we say color—red, yellow-green, blue, etc., are all hues. Value is how dark or how light a color is, and chroma is how grey or how intense a color is.
Holbein used a value scheme that comprises a light-value focus (the face and collar) that is supported by a dark base (the clothing). This dark shape is further designed to surround the light-value face (using hair, hat, beard, shadow and sometimes even a straightforward dark outline). The whole of this is presented against a mid-value background (see illustration 3).
Next comes the choice of a hue scheme, which adapts itself to the value composition. These hue schemes are plotted on the color wheel. Those directly across from each other on the wheel are called complimentary colors, those not quite opposite each other are called near-complimentary, and so on.