Is White Really A Color? 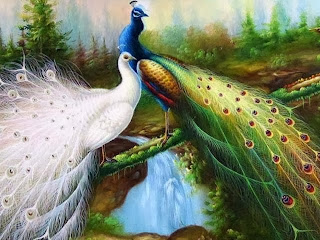 Some would argue that white represents the absence of color; others insist that white contains all colors. Sir Isaac Newton showed that sunlight contains colors when viewed through a prism. The artist profiled below has his own reasons for using white.

White is more than a color at Delaware art exhibition

The question is simple: is white really a color? There are differing opinions among color theory purists whether white should be considered a color at all, since it represents the absence of hue, and it cannot be made from the three primary colors.
It's not usually represented on an artist’s color wheel, but white is normally an essential ingredient of any palette. Artists know it as the strong, brilliant white pigment available for oil paintings.
“Into White,” a solo exhibition of watercolor and oil paintings by Greg Mort is on display at the Somerville Manning Gallery in Greenville, N.C. and runs through Jan. 4. Recognized today as one of America's leading contemporary artists, his watercolor, oil and pastel images are in notable collections around the world.  Mort’s works have been exhibited for 27 years at the gallery.
“This show is about the many shades of white and the variation in those shades,” Mort explained. “In watercolor paintings you paint the objects, but leave part of the paper untouched. It’s like a pencil drawing with trees and the sky, but for the moon you leave that space white. The lighter the object the more it moves toward you when you’re viewing the painting.”
The 19 paintings in “Into White” were developed from Mort’s exploration of the tension resulting from the presence of white or the absence of color in an image. Painting with a limited palette allows Mort to draw the viewer’s attention to specific details in each composition, like the petals of a blooming peony or the intricate striations of a conch shell. His use of white in the recent watercolors and oils evoke an ethereal beauty, enticing the viewer to appreciate his take on the objects depicted.
The inspiration for the exhibition came about a year ago when Mort was listening to and then interpreting the lyrics to the Cat Stevens’ song “Into White.”

“It’s a mixing of all these everyday things and all these colors come back to white,” observes Mort, who lives on 130 acres in Ashton, Md. “I’ve always been fascinated by the notion of white. It’s such a clean thing, like symbolizing purity in a wedding. To me it’s also an abstract notion, like a Robert Frost poem. He captures so much with so few words.”
Image in reverse
Mort approached the construction of each of these watercolor paintings by developing the image in reverse. Much like graphite drawing, he started on a blank white sheet of paper and developed the darker section, leaving the areas of light untouched. Since transparent watercolor affects the paper in a similar fashion, one becomes acutely aware of the underlying importance of negative space.

As Mort was building his collection of paintings for the exhibition, serendipity played a part, such as in “Apple White.” Don’t seek, find, as Picasso once said.
“It starts with a theme and then it feeds off itself,” Mort described. “I was visiting a neighbor up in Maine and was walking through a grove of apple trees. The usual red and green ones, then I discovered these blonde apples. I wasn’t expecting to see them and may have walked right past except for the theme of my paintings, so I was receptive. Once you’re leaning one way it’s easier to fall into other aspects of it.”
Last year near his summer home in Port Clyde, Maine, Mort came across a portion of a beach made up of tiny conch shells, no bigger than the size of the end of a thumb. White on white became “Latitude.” 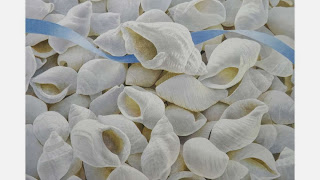 “They were incredibly white, almost blindingly bleached white by the sun,” Mort described. “I grabbed a bag of them. A perfect fit for the nautical life in Maine. Latitude comes from the blue ribbon that I stretched across the shells. It was a suggestion of infinity. The ribbon leads you beyond the painting.”
Drawing and painting since childhood, Mort earned his first museum show at eighteen. His creations have the classic feel of the Dutch Masters but are juxtaposed with startlingly modern designs. They are on display at the Smithsonian, Corcoran Gallery of Art, Delaware Art Museum, Academy Art Museum, Portland Museum of Art and Brandywine River Museum as well as in scores of private collections.
Art and astronomy
Mort regularly hikes the rugged coast of Maine and navigates the rural trails of Maryland with his brushes, paints and canvases. He sees a strong connection between both art and science.
“There's an amazing parallel between science and art, and if you look at art history, you can see any number of people, like Leonardo da Vinci, who was a scientist and an artist, and for me, both are almost one and the same,” Mort maintained.
“Both art and science seek a kind of beauty. We try to get at the essence of things. Take the bark of a tree, why does it look that way? Take a mundane object that can be instilled with new life. A large part of my artistic journey as a painter seems to find its roots in scientific inquiry.”
Mort also was honored when his 2008 oil painting “One World” was recently moved from the U.S. Embassy at the United Nations building in New York City to the White House. The large-scale oil features a globe of the earth in an ancient doorway and was first shown at Somerville Manning Gallery’s “American Green” environmentally themed exhibit.
“One World” was part of President and Mrs. Bill Clinton’s collection during their early days in the White House. The Mort family foundation Art of Stewardship encourages environmental awareness by offering resources and opportunities to artists through grass roots efforts.
“It is a huge honor to have my ‘One World’ painting at the White House,” Mort said. “There is so much power in art and imagery. Artists can accomplish so much by using their voices to raise awareness.”
Somerville Manning Gallery is located at 101 Stone Block Rd, Greenville. For exhibition hours, visit www.somervillemanning.com
---
Terry Conway is a Delaware Arts and Culture writer.  You can view more of his work: www.terryconway.net.
Posted by ColorFilled at 7:06 AM