The Golden Career of Gustav Klimt

Gustav Klimt ( 1862-1918) painted Adele Bloch-Bauer's portrait with oil and gold on canvas in 1907. She is posed with her hands clasped; she had a deformed finger. Her clothes as well as the background are predominantly luxe, making this a striking and unforgettable portrait.

Los Angeles
On June 18, 2006, the art market confirmed the established judgment of Austrian painter Gustav Klimt  as one of the most important artists of modern times, and overnight transformed him into the most newsworthy. That day, his "Portrait of Adele Bloch-Bauer I" (1907)—for which three tantalizing sketches are now on view in Los Angeles—was sold to the Neue Galerie in New York for $135 million, then the highest price ever paid for a painting.

Gustav Klimt:
The Magic of Line
The Getty Center
Through Sept. 23 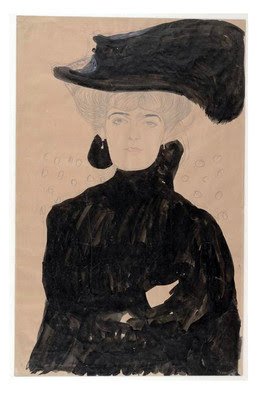 "Gustav Klimt: The Magic of Line," an impressive, well-chosen exhibition at the Getty Museum, contains none of his paintings, except for a single oil sketch. The curators (Marian Bizanz-Prakken, who created the original show for the Albertina Museum in Vienna; Lee Hendrix and Edouard Kopp at the Getty) decided to focus on Klimt's drawings, which they regard as "the font of his creative process."
Although most of the 111 drawings at the Getty (there were 170 at the Albertina) were preliminary sketches for paintings, many of the more impressive existed for their own sake. Of his unidentified, autonomous early-chalk portraits, the finest are two realistic, delicately drawn, melancholy-looking women of 1897-98, one of them belonging to the Getty. The best of his early, traditionally shaded preliminary drawings for wall and ceiling paintings are of the heads of two actors portraying the dead Romeo and Juliet and four audience members gazing at them, drawn for his depiction of a 16th-century production for the Globe Theater in London. The painting was one of 10 commissioned from the 24-year-old Klimt and two partners for the ceilings of the new Vienna Burgtheater in 1886.
By his next three big mural commissions, Klimt had rejected traditional painting and drawing, and embraced the sinuous, symbolist, often irrational and erotic styles of the European fin-de-siècle.
The first commission was a trio of epic, symbolic and bewildering 14-by-20-foot paintings ("Philosophy," "Medicine" and "Jurisprudence") commissioned in 1894 (completed 1901, altered 1907) for the ceiling of the Great Hall of the University of Vienna. All three suffered the double indignity of being rejected by the university, then burned by retreating Nazis in 1945. The second commission is a 97-by-7-foot processional frieze set high on three walls of one gallery for a 1902 exhibition honoring the 75th anniversary of Beethoven's death at the Vienna Secession building, where it returned in 1975. It has been marvelously reproduced at the Getty by Olson Visual, where it fills three comparable walls. The third is a 6-by-50-foot mosaic wall, made of white marble plaques inset with gold and stones in 1911, which still stands in the banqueting hall of the Palais Stoclet, a famous (but inaccessible) Art Nouveau mansion in Brussels.
The 29-by-22-inch oil sketch for "Medicine" (from the rejected University series) tells us almost all we need to know about this vanished work. Most of the pencil sketches here for this painting refer either to the collaged pile-up of bodies on the right (old and young, well and ill, living and dead), and one female nude floating in space apart from the rest. The drawings for the Beethoven Frieze show characters from episodes of the Ninth Symphony (as interpreted by Wagner), concluding with a nude couple embracing and conveying (in Schiller's and Beethoven's words) "the kiss to the whole world," amid a symmetrical choir of upright angels. This is the first of several drawings here leading towards Klimt's most famous painting, "The Kiss" of 1907-08.
After 1900, Klimt became the preferred portrait painter for the wives and daughters of Vienna's wealthy bankers and industrialists, many of them Jewish. Margarethe Wittgenstein and her powerhouse family never liked Klimt's finished painting of her. But the black chalk drawing for it here—the dark eyes looking at us, the perfect curve of her shoulders wrapped in a figured flowing shawl, the soft parallel chalk lines that define the fall of her skirt—may well lead one to prefer the drawing to the painting.
Of the 19 drawings of 11 identified models at the Getty, at least three are more interesting than their corresponding oils and two are their equals, even with the loss of the rich millefiori color of backgrounds and gowns. What you lose in the paintings are strikingly black eyes and lips; the quick, instinctively drawn curves of perfect profiles; the dozens of parallel, writhing lines by which Klimt creates a gown; the sense of a figure floating in space or growing out of the curve of a chair.
Thirty-two of the Klimt drawings at the Getty are of female nudes, not including male-female couples. After 1902—more explicitly after 1910—most of Klimt's drawings of female nudes were erotic, in some cases pornographic. The Albertina catalog includes at least a dozen female nudes that—however exquisite as drawings—I can only call pornographic. Five of them are at the Getty. There are no doubt hundreds more. In conversation and in the catalog, Ms. Bizanz-Prakken defends all this as part of Klimt's fascination with the "cycle of life." But in an essay she wrote for the Neue Galerie's 2008 Klimt catalog (to celebrate its new acquisition) she wrote more openly about his sexual mania (he is supposed to have fathered at least 14 children, mostly by his models), and his probable dependence on the tidal wave of pornographic photographs for sale to respectable Viennese gentlemen of the time.
Is the "Portrait of Adele Bloch-Bauer I" worth $135 million? I have no idea. But after looking at three of his preliminary, independent drawings for the work at the Getty (and, earlier, those surrounding golden Adele in her handsome new home on Fifth Avenue), one is easily persuaded that Gustav Klimt (however unconventional his personal life) could, on occasion, be one of the most instinctively wise and deft draftsmen of the 20th century.