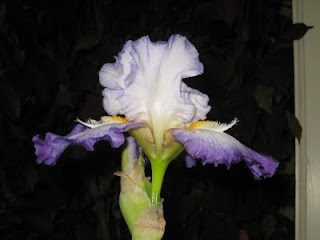 VIOLET is linked both with sobriety and with moderation in general, a symbolism based on the idea that it is midway on the spectrum between the red of passion and the blue of intellectualism. The Roman custom of wearing cooling wreaths of violets at banquets may have influenced this perception. There were Greek precedents, judging by the name given to the quartz gemstone amethyst which literally means “not intoxicated.” Its temperate violet or cool purple hue made it the stone of Catholic bishops. Purple brings to mind wealth and pageantry. Purple and violet are considered luxurious shades because of the great cost in ancient days for cloth dyed with scarce seashells along the Mediterranean seacoasts.
Violet is also considered a color of humility, one of the virtues. Also, it connotes personality traits such as magisterial, altruistic, noble, personal, artistic, boundless and mystical. Violets sometimes surround paintings of the Virgin Mary and Jesus with these sentiments understood by adoring viewers.
Graceful and feminine, Violet and lavender have long been favorite flowers and colors worn by genteel ladies. These tints of purple suggest refinement along with grace, elegance, and something special. They hold an almost sacred place in nature: lavender, orchid, lilac, and violet flowers are often delicate and considered precious. It is the color of femininity, a grown up pink.
“At the violet hour, the evening hour that strives homeward, and brings the sailor home from sea.” T. S. Elliot describes the sky so well, we are fortunate to see a violet sky near sundown.
Negative character traits associated with these beautiful colors include merciless, spiritually haughty, self-important, depraved, snobbish and dictatorial.
PURPLE, especially dark tones found in eggplants, have continued to remain popular for the past several seasons in accent colors for the home. Pittsburgh Paint Company produces one called “Purple Cabbage.” Purple through the ages has designated royalty, Nero even forbade any of his subjects to wear his special color. Females designated purple as their favorite color in a poll. Men named it their least favorite color.
Purple is a color to be used sparingly. It is a “heavy” color, and long exposures to purple may become depressing. Some psychologists think it can reveal deep-rooted depression and even suicidal tendencies in artists. To offset this, the antidote is exposure to gold in lighting, décor or clothes if one wants to literally lighten up.
Shug’s strong opinion, stated in The Color Purple, “I think it pisses God off if you walk by the color purple in a field somewhere and don't notice it.” She’s right, most of us do notice purple and either love it or hate it.
Cleopatra stirred up the hatred of the Romans when her lavish purple sails above her royal barge caught their eyes. Such a lavish display of wealth seemed gauche to the Romans, undoubtedly influenced by their jealousy of her wealthy country.
Cultural Symbolism of Colors:
Purple-In Thailand: mourning, widows; in the East: wealth; in the West: royalty and penitence; in astrology: color of Gemini, Sagittarius, and Pisces; in Chinese Feng Shui: Yin, spiritual awareness, physical and mental healing. It also suggests mystical depth and ancient ritual. Purple elicits strong positive and negative reactions. In dark versions such as eggplant, it conveys formality and dignity.
Violet-a tint of purple, in astrology it represents Virgo and Libra; in psychology it supposedly suppresses appetites, connotes a peaceful environment, and wards off migraines.
Posted by ColorFilled at 6:01 PM