“The cloak of the Virgin Mary is blue. Sacre bleu. It was not always so, but beginning in the  thirteenth century, the Church dictated that in paintings, frescoes, mosaics, stained glass windows, icons and altarpieces, Mary’s cloak was to be colored blue, and not just any blue, but ULTRAMARINE BLUE, the rarest and most expensive color in the medieval painter’s palette, the source mineral, more valuable than gold. Strangely enough, in the eleven hundred years prior to the rise of the cult of the Virgin, there is no mention in Church liturgy of the color blue, none, as if it had been deliberately avoided. Prior to the thirteenth century, the Virgin’s cloak was to be depicted in red—color of the sacred blood.


Medieval color merchants and dyers, who had been geared up for red since the time of the Roman Empire, but had no established natural source for blue, were hard-pressed to meet the demand that rose from the color’s association with the Virgin. They tried to bribe glass-makers at the great cathedrals to portray the Devil in blue in their windows, in hope of changing the mind-set of the faithful, but the Virgin and Sacre Bleu prevailed.


The cult of the Virgin itself may have risen out of an effort of the Church to absorb the last few pagan goddess-worshippers in Europe, some of those the remnants of worshippers of the Roman goddess Venus, and her Greek analogue Aphrodite,  and the Norse, Freya. The ancients did not associate the color blue with their goddesses. To them, blue was not even a real color but a shade of night, a derivative of black.


In the ancient world, blue was a breed of darkness.” 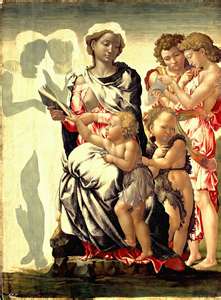 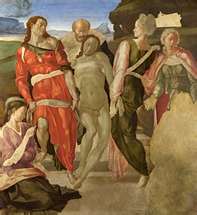 The Entombment by Michelangelo 1497


“The pigment was, for a long time, more valuable than gold and during that time, to commission a painting that used it was a sign of status for the patron and his family. The two Michelangelo paintings, The Manchester Madonna  and The Entombment, are unfinished. The blue parts remain unpainted, and both hang in the National Gallery in London, but it’s likely that they remain unfinished because the painter was unable to obtain the ultramarine paint he needed and moved on to other commissions, or the patron refused to pay the high price of the color.”


These excerpt s are from Sacre Bleu: A Comedy d’Art  by Christopher Moore
Posted by ColorFilled at 5:35 PM