Sacre Bleu: A Comedy d'Art by Christopher Moore turned out to be an imaginative farce with blue depicted as a muse and the color man as a sometimes diabolical character. Despite this, Mr. Moore included some excellent information on art and artists. The first excerpt focuses on the Impressionists and their immense contribution to the history of art: 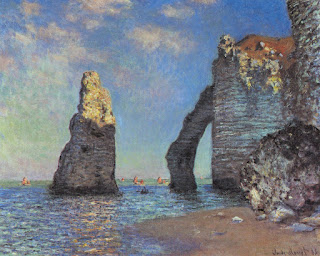 
“There is a tendency among academics and art enthusiasts to dismiss the Impressionists, with their fields of flowers and their pink-cheeked girls, as insignificant, pablum for the masses, and once you’ve seen your thousandth tote bag sporting Monet’s water lilies, it’s understandable. Among museums, the Impressionists represent a cash cow, because any show that features them will pack the museum for weeks, even months, while it runs, and so they are often regarded with a restrained resentment, if not for the painters, for the masses who come to see their work. Out of the context of their own time, the Impressionists just seem to be producing “pretty pictures.” Yet, Impressionism represented a quantum leap in painting and ultimately art in general. They came from all walks of life, from all economic strata, and had wildly different ideas about both society and art, but what they all had in common, the single element that united them beyond rebellion against tradition, was their love of painting. Whether it was the invention of photography, the middle class that rose up because of the Industrial Revolution, or simply because paint became available in tin tubes, thus freeing the painter to leave the studio and paint the world, time and events conspired for the Impressionists—their technique as well as their philosophy of capturing the moment—to rise. The conditions, the context were there, but the engine of the revolution can be traced to a group of people who chose, over their own economic and social interests, to pursue an idea. There’s courage in those paintings of placid ponds and pink-faced little girls, a courage that went forth to inspire the next generation. Toulouse-Lautrec, van Gogh, Gauguin, and so on into Matisse and Picasso, and thus modern art through the twentieth century.”
by Pierre Bonnard, a post-Impressionist

If you are interested in the rise of Impressionism, Christopher Moore recommends:


Color by Victoria Finlay (Random House 2002) This tells the story of one woman’s adventure traveling the world to the sources of the great natural pigments, in the process imparting interesting history and anecdote to bring the science and geography of color to life.


Bright Earth by Philip Ball (University of Chicago Press 2001) An exploration of the history and science of color, written in lyrical prose that explores the role of color as it applies to art history as well.


Renoir, My Father by Jean Renoir (with Pierre Renoir's stories of fellow Impressionists told to his son Jean who convalesced at home with his father after an injury.) 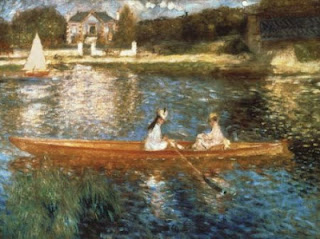 I agree with Mr. Moore on his suggested reading. Color and Bright Earth have been referred to many times for information I’ve shared in this blog.  From Mr. Moore, I also learned that Manet, Seurat, Theo van Gogh and Gaugain all died from Syphilis.
Babs Loyd
Posted by ColorFilled at 8:09 AM