The daughter of an unmarried laundress, Suzanne Valadon became a circus acrobat at the age of fifteen, but a year later, a fall from atrapeze ended that career. In the Montmartre quarter of Paris, she pursued her interest in art, first working as a model for artists, observing and learning their techniques, before becoming a noted painter herself. (She was talented because there were many models for the Impressionists and other artists, but no other I know of became a painter. Valadon is exceptional in this regard. BBL)
She modelled for Henri de Toulouse-Lautrec (who gave her painting lessons), Pierre-Auguste Renoir, and Pierre-Cécile Puvis de Chavannes, and is known to have had affairs with the latter two. In the early 1890s she befriended Edgar Degas who, impressed with her bold line drawings and fine paintings, purchased her work and encouraged her efforts. She remained one of Degas' closest friends until his death.
Valadon painted still lifes, portraits, flowers, and landscapes that are noted for their strong composition and vibrant colors. She was, however, best known for her candid female nudes, particularly because it was unusual in the nineteenth century for a woman artist to make female nudes their primary subject matter.

A perfectionist, she worked on some of her oil paintings for up to 13 years before showing them. She also worked in pastel. Her first exhibitions, held in the early 1890s, consisted mostly of portraits. She regularly showed work at the Galerie Bernheim-Jeune in Paris. Her later works, such as Blue Room (1923), are brighter in color and show a new emphasis on decorative backgrounds and patterned materials.
Today, some of her works may be seen at the Centre Georges Pompidou in Paris, the Museum of Grenoble, and at the Metropolitan Museum of Art in New York.

Dance at Bougival by Renoir 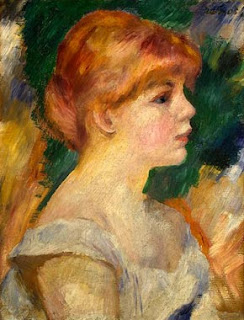 Portrait of Suzanne Valadon by Renoir

In 1885, Renoir painted her portrait again as Girl Braiding Her Hair. Another of his portraits of her in 1885, Suzanne Valadon, is of her head and shoulders in profile (see above.)
Valadon frequented the bars and taverns of Paris along with her fellow painters, and she was Toulouse-Lautrec's subject in his oil painting The Hangover. 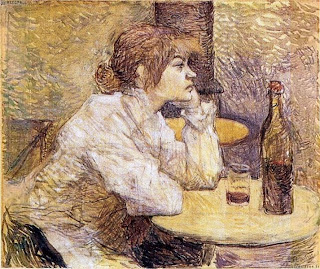 The Hangover by Toulouse-Lautrec 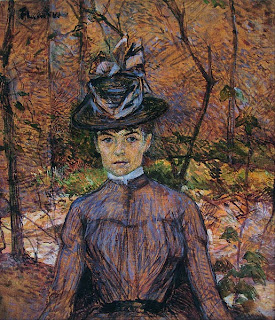 Portrait of Suzanne Valadon by Toulouse-Lautrec
Posted by ColorFilled at 8:51 AM