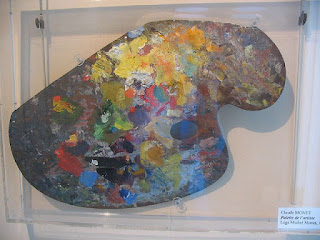 Claude Oscar Monet's palette
"Broken color refers to a painting technique 'invented' by the Impressionists that is still used today by some artists. Technically speaking, it goes like this: suppose I have an index card that is a permanent light green color. You can see it from across the room easily enough. Yup. That is green alright. Now we take an index card that is half, say, cerulean blue, and half cadmium yellow light. I put a hole in the middle of the card and I spin it like crazy. In principle, from across the room you will see a similar green but this time the green has more energy. It is alive. It mixes optically at a distance. That is what broken color is suppose to achieve – the actual sensation of light itself.
But without the point of view, the technique is rather empty and vacuous. It is like the dreadful 'style' where someone who thinks they are using an Impressionist method and simple makes a lot of little dabs to create an effect, albeit a rather dead one at that.
The Impact of the Impressionists
It might do us well to forget the term 'Impressionism'. It was a term of approbation, as you know. The 'Impressionists' were also called the 'insurgents' and their new way of painting was called exactly what it was, 'the new painting'.
Now, let’s capture that moment in the mid-1870s Paris. The social edifices of the aristocracy were crumbling. There was a bottom-up, democratic thrust in art let by Manet and others, including many women and the lower classes. Remember that artists were attacking the hierarchy of the art world in Paris. It would be equivalent today if artists such as ourselves were attacking the museums, auction houses, the non-profit mechanism of directing art, local art commissions, academic thinking and the gallery system of distribution.
An example of the art they opposed would be the work of Ingres whose work took months to create, with careful labored drawings, and not a hint of a brush stroke. More important, perhaps, was that painting of the artists in favor such as Ingres were the paintings of classical realism and to make heads or tails out of such work, you had to have a classical education. Everyone else was excluded, just as today much of the public is in effect excluded from the conversation about 'important' art.
What Was Different About the Art of the Impressionists
Now, instead of making smooth paintings that referred to classical literature and history, the Insurgents painted the 'real' life around them from boat parties to shoes to streets to haystacks. It was personal and they wanted their personality to show – hence, the unabashed use of the brush stroke.
But here is the big step: the paintings no longer were pictures in which there were references to other things (forget commissions!). They were hedonistic visual treats for the artists who did the work. They tasted the world through their eyes.
The new painting was all about the thrill and delight of the visual sensation, which means becoming intimately involved with the sensation of light or 'painting the light'. It is about painting directly from nature and expressing the rush of your visual (as opposed to ideational) sensation on the canvas in such a way that the activity itself is the point, not the painting!

The most important thing to remember when painting using broken color is that you are trying to make the painting itself become light so it has an independent life. Take the painting of mine shown here, done in sunlight, I’m trying to express my enjoyment of the colors and energy of the light that seemingly drips over everything.
A smudge of warm gray bumps up against a streak of orangy green. The strokes are open and left to sing – I hope – by interacting at a distance to create the vibrancy of the visual world that I’m immersed and lost within.
These broken-apart strokes that release the color, follow an underpainting in which I 'scumbled' abstract layers of colors. I then squint in order to simplify and see relationships and look for little sensations of color and try to put them down with single separate brushstrokes.
The length and size of the brushstroke or the pattern is determined by my mood or feeling that I am getting back from tasting the subject with my eyes. I don’t worry about a thing except getting the thing through the color. If I am faithful to the relationships of color and value that I see, the subject will come together at a distance with a great deal of freshness and liveliness.
The Use of Broken Color Today
Unfortunately, or fortunately depending on your perspective, few people actually paint like this today. The new painting is considered old fashioned by many, including the gate-keepers or the art experts. In fact, painting itself is considered 'dead' by many experts. But that leaves the rest of us who go on anyway, like the 'insurgents'.
The power of the personal brushstroke is very much alive even when we are not using broken color per se. True enough, there seems to be an aesthetic afoot that once again wishes to see the brushstroke disappear.
Much to my chagrin, the art world has moved beyond 'painting the light' if for no other reason that there are few teachers left who really continue to explore the practice. In the end, contemporary painters regardless of their perspective often just cannot deny that personal urge to drag a loaded brush across the canvas and leave the mark alone. That personal expressive swish may be the legacy of broken color. Not a bad contribution at that." 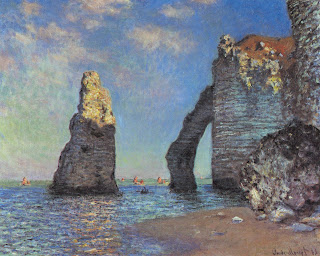 Claude Oscar Monet's The Cliffs of Dover
Posted by ColorFilled at 12:11 PM