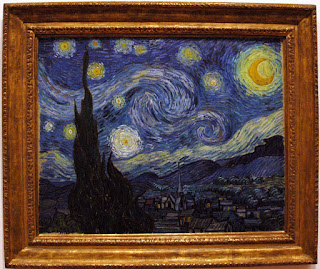 Vincent van Gogh's Starry Night is one of my favorite paintings. The motion in his paintings' skies reveals his awe of God's creation. The emotion in his brushwork, choice of colors and sensuous outlines of shapes all work together to pull us into his works.

Canadian painter and raconteur/philosopher on art, Robert Genn, recently had this to say about VG's work:


"The name Otto Wacker might not mean much to you. He was a young art dealer in Berlin in the 1920s who managed to find a lot of "undiscovered" Van Goghs and sell them here and there. He eventually went to jail for the fakes, but not before many art critics, experts and museum directors had made a fools of themselves authenticating and unauthenticating the lineup of the work in the courtroom.
Fact is, Van Gogh's paintings were fairly easy to counterfeit. The style is unique and can be simulated. The technique is pretty straightforward--characteristic and frenzied strokes directly and singularly applied, often with colour right out of the tube. In other words, Van Goghs were faked because they could be. It's estimated that at one time as many as 600 fake Van Goghs were floating around Europe. In the case of Otto Wacker, his painter-friend was never found, but most suspicion goes to his brother Leonhard."