Glass of All Colors 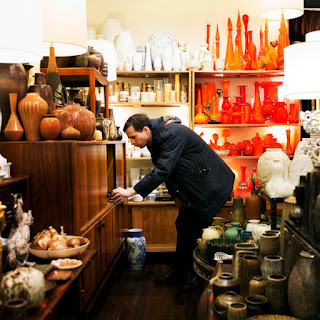 Sand and fire are required to produce glass, one of the most beautiful vehicles for color on our planet. Today is my birthday, and if I could, I would visit this incredible shop, The End of History, in NYC to select a piece of glass, or a vase, or a paperweight. The owner, very wisely, takes a piece home and returns with another, so he won't hoard them. But, it would be hard for me to choose just one. 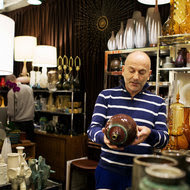 Stephen Saunders, the owner, showed one of his most valuable pieces, a $16,000 piece of pottery made by Berndt Friberg. More Photos »


Organized by color and form, the pieces on display form an eye-popping Technicolor tableau, clustered in islands of cerulean, ivory, amber, ebony and bubble gum pink.

On one shelf, Italian Murano glass geode bowls beckon in hues of green and turquoise blue. On another, glossy, undulating orange vases — representatives of the Danish manufacturer Holmegäard’s coveted 1960s Carnaby series — form a sort of Pop Art fantasia. A 15-inch-long Murano tiger the color of a sunrise lurks above them. “It’s a fantastic object, one of a kind,” Mr. Saunders said of the $2,750 creature, adding, “I don’t love figurines unless they speak to me.”
Mr. Saunders’s passion for glass goes back to his childhood on the Isle of Wight, where he had relatives in the antiques business. “At 7 years old, I was picking the best rummage sale on the island,” he recalled. He arrived in New York in 1983 after moving on a whim from Honolulu, where he worked in the travel industry.
Although Mr. Saunders subsequently spent more than a decade as a fashion stylist, he was always buying and selling glass. His “light bulb moment,” he recalled, came at a flea market when he found a 1951 Murano glass vase with an original $350 price tag still on it, on sale for $25. “I started to buy every piece I could,” he said.
His shop’s somewhat inscrutable moniker was inspired by Francis Fukuyama’s book “The End of History and the Last Man.” When he opened his doors, said Mr. Saunders, 54, “the millennium was coming up and the store was full of all these 20th-century things.”
At the time, he said, Hudson Street was “the cheapest place to open a store.”
“There was no Marc Jacobs or Richard Meier towers,” he said. “Everything has grown up.”
The area’s gentrification has been good for business: His regular customers include well-known decorators like Amy Lau, Steven Gambrel and Shawn Henderson, and the bulk of Mr. Saunders’s inventory — priced from $250 to $16,000 — goes into the homes of wealthy families. But visitors arrive from around the world, he said, remembering a woman from Taipei who came in “waving a picture of a Danish Modern vase from New York magazine, saying, ‘I have to have this!’ ”
Brazilians “absolutely love this stuff,” he added, recalling a day when the actress Sonia Braga saw the store while riding past it on a bus and made the driver let her out.
As they browsed, Mr. Saunders pondered a shelf of his “latest obsession,” white German porcelain tattooed with intricate gold embellishments. “Inasmuch as an object has a soul, these have that because they were made with care and with love by skilled people,” he said. “They have a life and a story to tell.”
Posted by ColorFilled at 1:43 PM