Color of hair and eyes revealed in DNA gives new information on old, and in some cases ancient, skeletal remains. This finding fascinates me. It may be possible soon to know what our ancestors looked like before photos were made. The realm of possibilities are fascinating. 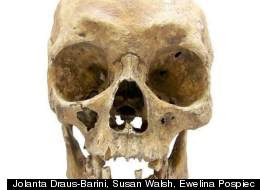 By analyzing genes from a tooth of Polish Gen. Wladyslaw Sikorski, researchers confirmed he had the blue eyes and blond hair seen in portraits painted many years after his death in 1943.

The color of the eyes and hair of ancestors dead for hundreds of years can now be revealed from their DNA alone, researchers say.
These findings suggest investigators not only can uncover new details from centuries-old human remains, but can also help identify crime victims, scientists added.
By comparing genomes across thousands of people, researchers identified genetic variations at 24 different points in the human genome that are linked with eye and hair colors, which past studies used to help determine the appearance of people who had died relatively recently. Now a team of researchers from Poland and the Netherlands have developed this system further to reveal the appearance of people long dead.
"We were able to look at the appearance of people who died several hundred years ago," researcher Wojciech Branicki, a geneticist at the Institute of Forensic Research and Jagiellonian University in Kraków, Poland, told LiveScience.
For instance, the researchers analyzed DNA from Gen. Wladyslaw Sikorski, who was born in 1881 and died in 1943. During World War II, Sikorski was commander-in-chief of the Polish Armed Forces and was also prime minister of the Polish government in exile. He died in an airplane crash at Gibraltar. By analyzing genes from one of his teeth, the researchers confirmed he had the blue eyesand blond hair seen in portraits painted many years after his death.
"This system can be used to solve historical controversies where color photographs or other records are missing," Branicki said.
The researchers say their system, called HIrisPlex, can predict either blue or brown eye colors with about 94 percent accuracy. When it comes to hair color, it has accuracies of 69.5 percent for blond, 78.5 percent for brown, 80 percent for red and 87.5 percent for black.
For medieval samples, where DNA is relatively degraded, this system was still capable of predicting eye and hair color from remains about 800 years old. For instance, the researchers identified one mysterious woman from between the 12th and 14th centuries A.D. who was buried in a crypt of the Benedictine Abbey in Tyniec near Kraków, where only remains of male monks were expected. The results hint that she had dark blond or brown hair and brown eyes. [Science of Death: 10 Tales from the Crypt & Beyond]
Although this research can help reveal what ancient human ancestors might have looked like based on their DNA alone, Branicki thinks the most practical aspect of their work is how it can help identify corpses for forensic analysis. For instance, "some of our samples were from unknown inmates of a World War II prison," he said. "In these cases, HIrisPlex helped to put physical features to the other DNA evidence."
In the future, the system may look at more than 24 points in the human genome — "from research carried out on the mouse, we estimate that 127 genes may be involved in human pigmentation," Branicki said. Still, "although research on eye and hair color prediction is ongoing, and we may expect some new predictors, it seems that the main predictors have been already identified, and especially in case of eye color, we should not expect any breakthrough in prediction in the near future."
The scientists detailed their findings online Jan. 13 in the journal Investigative Genetics.
Follow LiveScience on Twitter @livescience. We're also on Facebook & Google+.
For portraitists of ancient people, this information should be valuable.
Posted by ColorFilled at 9:33 AM