Poll Shows Most Surveyed Would Prefer More Vibrant Colors in Home Decor But Many Still Play It Safe with Neutrals. 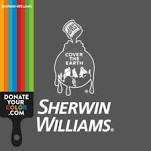 These findings and more are revealed in the National Painting Week Color Psychology Study by Harris Poll on behalf of Sherwin-Williams. The study included an online survey and analysis of social media posts that include colors and areas of a home. To celebrate National Painting Week, May 19–29, Sherwin-Williams is showing the impact of color by refreshing hundreds of community organizations, sharing these new research findings and providing insights from color psychologist Dr. Sally Augustin and its own color expert, Sue Wadden.
"Homeowners shouldn't stress when trying new colors, and many will likely find it is a worthwhile endeavor. Vibrant colors can have positive psychological effects. Emerald greens can be energizing, seeing red can give us a boost of strength and yellow can provide a sense of warmth," said Dr. Augustin, principal at Design with Science, a cognitive science-based design consultation firm.
Blue might be a good choice for homeowners considering more vibrant colors, with 62 percent of Americans selecting blue as one of the colors they like most. The strong preference for blue is consistent across genders, regions and age. Many Americans also said they associate blue with calmness (45 percent).
"In the case of blue, it's often subconsciously linked to trust, dependability, and competence and can also be associated with rest and provide a cooling sensation – making it a great choice for a bedroom or office," said Dr. Augustin.
The color black is the second-most popular color (32 percent), followed by red (31 percent).
Other key insights from the report, which also examined upcoming painting plans, include:
Refreshing hundreds of deserving spacesDuring National Painting Week and throughout May, thousands of Sherwin-Williams employees across North America are volunteering to refresh more than 240 locations in need of a fresh coat of paint, such as community centers, parks and historic landmarks. The company is donating the paint and supplies for projects, and plans to continue to give back throughout the year thanks in part to the help of supporters who "donated" their digital color as a part of Sherwin-Williams Donate Your Color Campaign (DonateYourColor.com).
Sherwin-Williams is partnering on many of these projects with local affiliates of the Boys & Girls Clubs of America and Canada, Ronald McDonald House Charities and Rebuilding Together. Painting contractors and builders are also participating in several community projects with the teams from their local Sherwin-Williams stores, lending their expertise to the benefit of many communities across the country.
And for homeowners inspired to refresh their own home, there's no better time than now. Sherwin-Williams is offering 30 percent off its branded paints and stains, and an additional 20 percent off the everyday low price on custom-order wallpaper, from May 19-29, in its neighborhood stores across the country.
More information on National Painting Week is available at Sherwin-Williams stores and swpaintingweek.com.
Ask Sherwin-Williams™
For more than 150 years, Sherwin-Williams has been an industry leader in the development of technologically advanced paint and coatings. As the nation's largest specialty retailer of paint and painting supplies, Sherwin-Williams is dedicated to supporting both do-it-yourselfers and painting professionals with exceptional and exclusive products, resources to make confident color selections and expert, personalized service at its more than 4,200 neighborhood stores across North America. For more information, visit sherwin-williams.com. Join Sherwin-Williams on Facebook, Twitter, Pinterest, and Instagram.
About The National Painting Week Color Psychology StudyThis survey was conducted online within the United States between March 23-27, 2017 among 2,201 adults (aged 18 and over) by Harris Poll on behalf of Sherwin-Williams via its Quick Query omnibus product. Figures for age, sex, race/ethnicity, education, region, and household income were weighted where necessary to bring them in line with their actual proportions in the surveyed populations. This online survey is not based on a probability sample and therefore no estimate of theoretical sampling error can be calculated. Social results were obtained by harvesting 12,089 public geo-tagged social media posts in the U.S. between January 1 - April 13, 2017 where selected colors appear within two words of areas of the home.
1 Millennials are defined as ages 22 - 40
2 Gen Xers are defined as ages 41 - 52
3 Boomers are defined as ages 53 - 71Sherwin Williams Paint It Week
Posted by ColorFilled at 3:17 PM