This exhibit is on my wish-I-could-go list because from the few pieces I have seen, it is color saturated. Enjoy the hues! Happy, healthy Thanksgiving to you and yours. 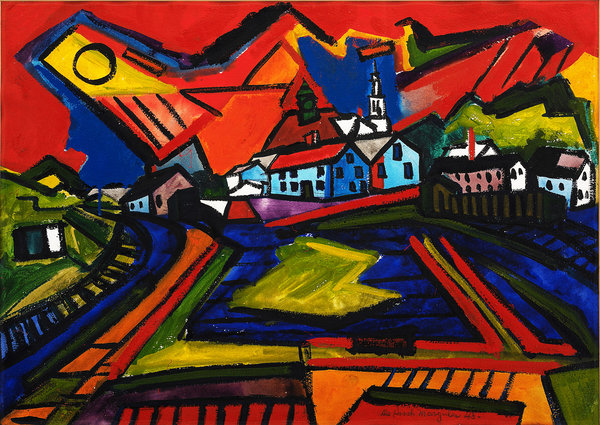 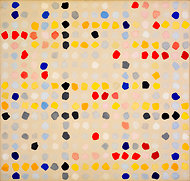 Nicolas Carone’s “Untitled,” circa the 1950s.
Enlarge This Image 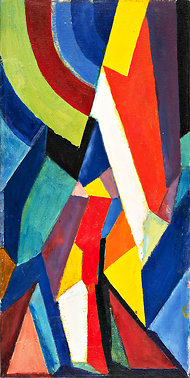 “Untitled,” undated, by James Henry Daugherty.
“Absorbed by Color: Art in the 20th Century” at the Heckscher Museum of Art in Huntington, N.Y., is thus a wildly ambitious show: a tour of color in 20th-century painting mounted in two galleries of modest size. Sometimes, however, the abridged version of a subject can be reassuringly manageable — particularly compared to the much larger 2008 exhibition “Color Chart: Reinventing Color, 1950 to Today” at the Museum of Modern Art in New York, which examined how postwar industrial color and art have become intertwined.
What also makes “Absorbed by Color” interesting is its limitations: it is not a showcase for the greatest hits of color, lacking an example from Picasso’s Blue Period, for instance, or a Mark Rothko Color Field painting; the show is drawn exclusively from the museum’s collection, which leans toward American 20th-century art, and many of the works here are by lesser-known or overlooked artists.
That is not to say that major practitioners are completely absent. Josef Albers, one of the most important color theorists of the 20th century, is represented by “Coastal” (1948-54), a rectangular oil-on-hardboard composition, and “Red-Orange Wall” (1959), an ochre-hued silk-screen. Albers was born in Germany and taught at the Bauhaus in Weimar and later at the experimental Black Mountain College in North Carolina. Retooling the progressive Bauhaus curriculum for American students, he taught a famed course in color theory at Yale, and wrote a landmark book, “Interaction of Color” (1963), which treated color in terms of relationships, or “interactions.”
The two works here by Albers differ from his best-known project, “Homage to the Square” (1949-76), in that they include more geometric shapes and planes of color than his elemental squares. Yet both works demonstrate the basic attributes of Albers’s theory, that colors essentially “deceive” (that is, they look different alone than when juxtaposed) and are experienced uniquely by each viewer. “Coastal” also displays Albers’s method of showcasing “pure” color, applied directly from the tube onto humble hardboard, rather than mixed with other colors and applied to canvas.
Earlier examples and approaches to color are present as well. George Biddle (1885-1973) was an American who studied in Philadelphia and Paris, where, according to a wall text, he fell “under the spell” of a fellow Philadelphian, Mary Cassatt; he said, “Through her eyes I was influenced by Degas.” His “Landscape/Cuba” (1925) shows this French Impressionist influence — but also that of Pointillists like Georges Seurat, who drew on the color theories of the chemist Michel Eugène Chevreul and the painting techniques of Diego Rivera, whom Mr. Biddle met during his travels in Mexico.
“Approach to Provincetown” (1948), a canvas by De Hirsh Margules (1899-1965), looks, with its riot of color, like a very late version of Fauvism, the early-20th-century tendency exemplified by Henri Matisse. Mr. Margules was primarily concerned with what he called the “time perspective” of painting, however, in which color suggests movement or time. The wall text relates this to the theories of thinkers like Henri Bergson and Albert Einstein.
Another huge influence on 20th-century painting was the Dutch artist Piet Mondrian, and even though his palette was eventually whittled down to primary colors — red, yellow and blue — and his compositions to spare geometric forms, his approach proved extraordinarily fruitful for younger painters. Robert Richenburg’s “Flicker” (1949), a composition of color-dots on canvas, hanging at the entrance to the exhibition, bears a resemblance to Mondrian’s “Broadway Boogie Woogie” (1942-43) at MoMA. Ilya Bolotowsky’s painting “Untitled” from around 1977 adopts the diamond-lozenge shape that Mondrian pioneered — but with darker, more saturated colors.
One of the more questionable moves on the part of the curators was to divide the latter half of the exhibition into sections based on the color wheel, with works arranged by red, orange, yellow, green, blue and purple hues. It is, of course, a rather child-friendly way to organize and explain the concept of color, and it reflects the dire need for museums to speak to the largest possible audience. (Personally,I love this idea, very innovative-BL)
For those steeped in art, however, like critics — and particularly the painters themselves — it feels like a travesty to see Albers’s work classified among the yellows and Brodsky’s among the blues. Painting, after all — and particularly the lineage to which these works belong — is more sophisticated than that.
Posted by ColorFilled at 4:34 PM