Words can be strange things. They have hidden histories that, once uncovered, take us to unexpected places. The ancient Greek word for color, pharmakon, is one such word, leading us to drugs, poison, wizards, and ritual human sacrifice.
For contemporary readers, associating color with drugs, spells, magic, and medicine might not come to us as quickly as maybe it did to the ancient Greeks. It is there, however, hidden in our word for a drug dispensary, our pharmacy. 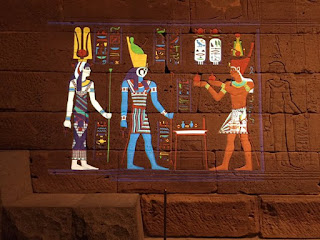 The Greeks loved color. Their temples and statues were painted in bold and garish color, but all of it has since washed away and faded with time, leaving us with the white marble underneath. We can appreciate the Elgin Marbles in the British Museum today and endlessly debate about whether they should be returned to Greece. Less controversial is whether or not the ancient sculptures, scrubbed free of their pigment during “conservation,” should be restored to their original color, perhaps tacky by today’s aesthetic standards. The Metropolitan Museum of Art found a good compromise with digital light projections on their ancient Egyptian Temple of Dendur exhibit.


Like a drug, color can both stimulate and calm; it can be a healing tool and good medicine. In his book Chromophobia, artist David Batchelor writes that “color is a lapse into decadence and a recovery of innocence, a false addition to a surface and the truth beneath that surface. Color is disorder and liberty; it is a drug, but a drug that can intoxicate, poison or cure. Color is all of these things, and more besides, but very rarely is color just neutral.”

Our understanding of “artist”—that is, the artist as quasi-religious figure, or a magician, or a truth teller and trickster—stands in contrast to the ancient Greek notion of the artist as craftsman or skilled decorator.

Much of our contemporary understanding of the role of the artist comes from ideas born of 19th-century Romanticism. But perhaps the ancient Greeks had a much more contemporary understanding of “art” and “artist” than many scholars realize. With pharmakos meaning druggist, poisoner, wizard, magician, etc., could we not very easily suggest the addition of artist to this list as well? The artist as pharmakos is not so much a stretch, being the purveyor of pigments and skilled, perhaps, in the masterful use of pharmakon (artificial color and paint) in such a way as to cast an intoxicating spell on the audience — whether to heal or curse, or perhaps poison our sensibilities.

But the artist as pharmakos is a double-edged sword, and once again the meaning is found in the word. Pharmakos: someone with the ability to poison or cure, and pharmakon: either a poison or a cure. This duality mirrors our own contemporary treatment of artists, of course, where artists are often perceived as being different from the general populace, by turns celebrated and vilified. Never completely trusted (like anyone with the ability to poison and cure), artists are perennial outsiders, held in suspicious esteem. And perhaps the ancient Greeks had an understanding of this, too, because as it turns out pharmakos also refers to a sacrificial ritual, for which a city-state would purge evil by exiling (after being beaten and stoned), or by execution (either thrown from a cliff or burned) a pharmakon, a human scapegoat and community outsider (usually a slave, a cripple, or a criminal).
The pharmakos ritual was performed annually and during times of great stress, such as a famine, invasion, or plague, in hopes that the fortunes of the city would take a turn for the better. But this should not be such an alien concept to us. In times of stress today, even simply financial stress, art and artists are often the first thing to be placed upon the sacrificial chopping block. Art is perhaps taken for granted because of its ubiquity. It is there when you step off the elevator on the way to a doctor’s appointment. It is there when you pick up a novel or when you turn on the radio. What happens when art is removed? Even a philistine, when stranded on a desert isle, would inevitably hum a crude song, draw with a stick upon the sand, or construct a shelter. Art, though hard to qualify in terms of physical necessity, is nonetheless vital to our well-being, necessary for our spiritual, emotional, and psychological well-being. Simply put, we cannot live without art."
Posted by ColorFilled at 12:34 PM