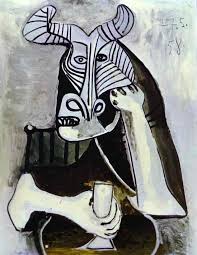 Pablo Picasso completed numerous prints during his artistic trajectory, constituting a fundamental portion of his oeuvre. As in his paintings, and as a result of his intense creative process, Picasso worked in series, repeating preferred themes and processes. With his tireless capacity for experimentation and absolute domination of all graphic techniques, Picasso is considered one of the most extraordinary printmakers of all time, with a body of work comparable in quality and scope to those of Rembrandt and Goya.

As explained in Ovid’s Metamorphoses, among other sources, the Minotaur was a being half man and half bull, born of the bestial union between Pasiphae, wife of King Minos, and a bull. Minos later imprisoned the beast in a labyrinth constructed by Daedalus. Since Classical Antiquity this mythological being and the labyrinth in which he was confined have become archetypes, explored within the visual arts and literature throughout the centuries, and have generated multiple interpretations, which continue to appear today.
The figure of the Minotaur, mythological and ancient, but full of life, appeared for the first time in the oeuvre of Picasso in a drawing of 1928. But in the Suite, commissioned by Ambroise Vollard, which Picasso completed between1930 and 1937, Picasso reinterpreted mythology, moving away from the classical representation of the myth of the Minotaur and toward his own personal biography, identifying with the doomed protagonist and placing him within the circumstances of his own artistic life, as well as his romantic relationships and sexual experiences. 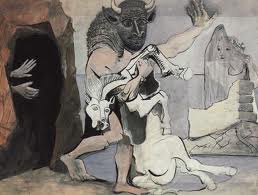 In this way the myth becomes a symbol of the labyrinth of the artist’s life. Accordingly, in his book Picasso à Antibes (1960), Romuald Dor de la Souchère – curator of the Château de Antibes – transcribed the following quote attributed to an octogenarian Picasso: “If you marked on a map all of the routes I’ve made and connected the dots with a single line, might not a Minotaur emerge? Picasso chose the figure of the Minotaur as his alter ego, making an ancient myth new and contemporary in such a way that one may “read” the Suite Vollard and La Minotauromachie as artistic diaries of the complex avatars of his life during the decade of the 1930s – “the worst epoch of my life,” as Picasso himself famously declared. Brassaï also noted that, “Picasso liked the Minotaur because of his human side, all too human.” 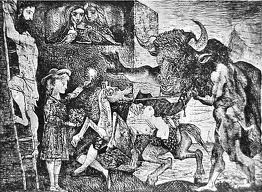 The 15 etchings dedicated to the Minotaur in the Suite Vollard can be divided into four groups. In the first, the Minotaur celebrates and drinks in the studio of the sculptor, together with the artist and his models. After these bacchic scenes follow others with a violent quality, in which Picasso demonstrates the animal nature of the Minotaur. Finally the third and fourth groups show a defeated Minotaur: in one, the half man, half bull is moribund; in the other, blind.