Does She or Doesn't She?

How Clairol Hair Color Went From Taboo to New You Throughout history, women have grappled with a biological inevitability that is, literally, always top of mind: Sooner or later, they go gray.
As the common wisdom goes, about 50 percent of women will be 50 percent gray by the time they turn 50. Men go gray too, of course, but they don't seem to agonize over it the way women do (they have other worries, like baldness). In fact, according to WebMD, 75 percent of American women admit to color-treating their hair. Among men, it’s only 11 percent.
Given these realities—both biological and social—it's no surprise that hair-dye ads aimed at women have been with us for three generations now. The ads on these pages show us that much, but they also show us something far more interesting. While the process of coloring hair has remained largely the same, attitudes about it have not. "It’s a generational thing," said Marti Brady, president and co-founder of consulting firm Beauty Management Group. At one time, women routinely concealed the fact that they dyed their hair. Many just lied about it. But today? "Most people don’t care," Brady said, “so long as they look good.”
In 1956, Clairol had a problem on its hands. Its new Miss Clairol "hair color bath" not only achieved natural-looking results in just one step, but women could also use it at home. The problem was the social stigmas tangled up in the practice of dyeing hair. Historically, most women who colored their locks either worked the stage or, worse, the sidewalk.
The task of destigmatizing hair coloring fell to Shirley Polykoff at Foote, Cone & Belding. As the agency's sole female copywriter, Polykoff understood that the key to selling Miss Clairol was to reassure its buyers that the color they’d get from that little box would be so natural, nobody would ever guess. Her tagline "Does she...or doesn’t she?" did the necessary reassuring so perfectly, it remains one of the most successful slogans in advertising history.
By the time this 1962 ad appeared in Life, Miss Clairol sales were already well on their way to $200 million—up from $25 million when Polykoff got the account. This little piece of marketing genius was actually a one-two punch. The "Does she or doesn't she?" question hovered at the ad’s center. Its predicate ("…only her hairdresser knows for sure") hovered further down. The line’s success hinged on relieving the uptight mores of the era itself, Brady said. “Back then, everything was so much more formal. Women got dressed up to go to the store.”
Today, of course, not only do plenty of women not care what they wear to the store, but they also don't care if anyone knows they dye their hair. In a social sense, that’s probably a good thing. The inadvertent result, however, is the disappearance of innovative advertising. The 2013 ad for Clairol’s Nice 'n Easy, Brady said, "looks like all the other beauty ads. There’s nothing iconic about this."
Nope. But you have to admit, those blond locks sure look natural. Makes you wonder if she dyes her hair or not. Hmmm. Does she or doesn't she? 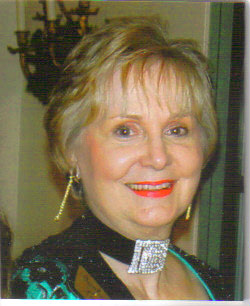 Only my hairdresser knows for sure. BBL
Posted by ColorFilled at 4:15 PM